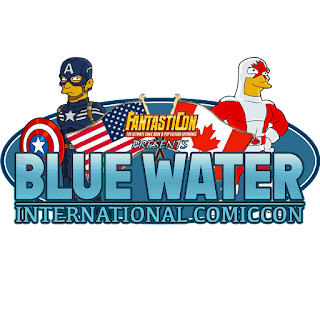 This Saturday and Sunday I will be a guest at the Bluewater International Comic Con in Port Huron, MI. This show has grown to a two day show with bigger media and comic guests, so I'm looking forward to the turnout. Click here for all the pertinent details. 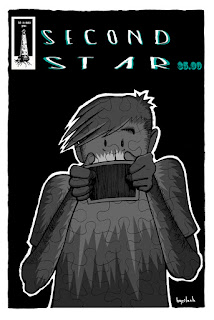 I will have copies of my new comic on hand. Although I had them with me last week for the Stone Soup show, I consider this to be the official unveiling. It's called Second Star and it is about a man who mysteriously receives a photo that involves his thought to be deceased well known archeologist grandfather. This sets him off on the adventure of its source and to find out if his grandpa is actually still alive. It's an experiment in storytelling, to be sure, so I hope that it goes over well.

This past Saturday night was the live model sketch night at Rainy Day Art Supply in Grosse Pointe Woods. Our model this time was the entertaining Luke MacGilvray. 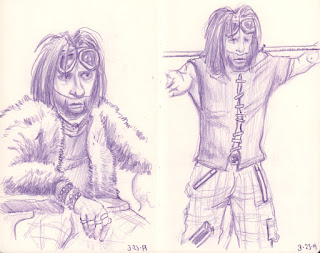 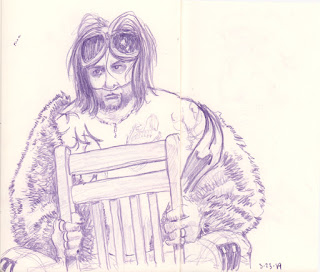 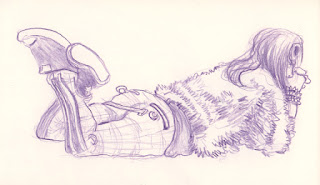 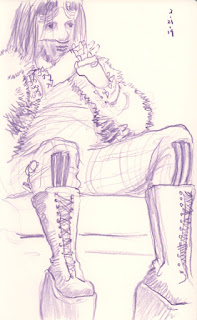 Beside our host Kelly O'Hara, some of the local artists in attendance were Darin Palmer and Anne Garavaglia. Check out their work! 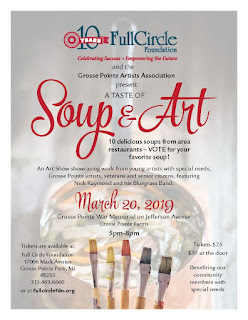 My first appearance of the year will be in two days at the Grosse Pointe War Memorial. I'm not sure just what to call this event, as it was billed to me as Stone Soup 2019, but here the official flier calls it A Taste Of Soup & Art, so let's go with both. It is an event to raise money for the special needs community and they will have comic book artists, cartoonists and fine artists, as well. There is an entry fee and I will be having copies of my new comic, Second Star on hand, as well as material more suited for a younger audience. So, if this sounds like something that would interest you and you are in the Pointes area, stop on by. It's for a good cause.

Some of the artists that will be on hand will be James Anderson, Emily Zalasko, Tom Savage, Eric Hodsen and Travis Macintyre from Source Point Press. 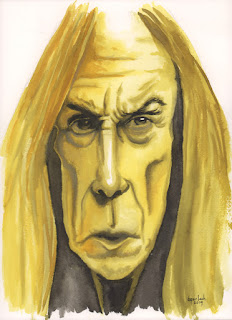 To say that Mr. Pop is an inspiration is kind of a weird thing. Just what has he inspired? He's kind of a nut, seems to have always been one. It could be his relentless punk/rock middle finger extended at the sterile, corporate banality of a certain way of thinking that has infected our culture. That would do it. But, to probe a little deeper, I think there is something more going on in his music that was appears on the surface. Brick By Brick, the song and the album have a lot of that. A search for character, for a truth that remains in the distance, something better. That's what I find inspiring. Combine that with that middle finger and you just might see it.

And if you don't agree, well, his version of Louie, Louie is rather entertaining.

This and more portraits will be part of my Facets of Inspiration exhibit at The River's Edge Gallery in Wyandotte, MI starting on April 18th.

Here is the 6th installment of the comic strip that Darin Palmer and I created way back when we worked in a factory together. The duck pond did exist. The trash in the duck pond did appear, sadly.
But, we never sat by the pond before work, only at breaks during the day. hell, we could barely get in the door on time without dragging our feet. Do you really think that we would purposely arrive early for any reason? I don't think so. 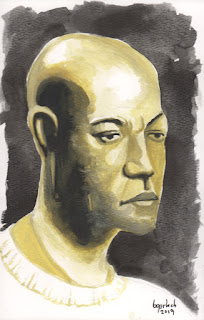 Are we inspired by the person/actor or do we just connect with the roles that they play? In the best of both worlds, I would like to say both. I've always liked Laurence Fishburne and the roles that he has given us. In interviews, both in print and on camera, he seems genuine. There is a consistency there. I like his voice, very distinct and I'm drawn to the cadence and sound of it. And as for the roles that he plays in his movies? From Apocalypse Now (he was only 16 when he began filming) to the Matrix, there's an impressive body of work there.

He was Morpheus, for Pete's sake...

This and many more portraits like this will be on view and for sale next month for my show at the River's Edge Gallery in Wyandotte, MI. More details forthcoming.