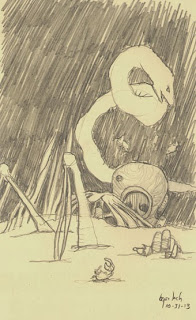 Here is a little Halloween sketch for your viewing pleasure. Always swim in pairs.
Posted by Bruce at 6:48 PM No comments: 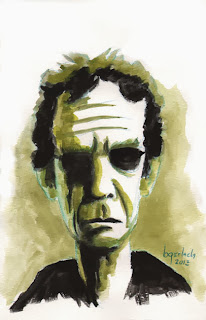 So, yesterday my friend and gallery director, Jeremy Hansen broke the news to me about the passing of rock legend Lou Reed. For some reason, I was glad that it was Jeremy that told me this, as he had a somewhat understanding of why I liked the music of Reed.

Anyways, as a youngster I was always fond of Perfect Day, Take A Walk On The Wild Side, and Sweet Jane. Still am. But, it was really when 1989's New York came around to my senses that I fully emersed myself in all things Lou. I got it. This guy had a voice (not so much the gravelly sound, but the inner voice) and a story to tell. A lot of stories, to be truthful. He was a man of experience, thoughts and  an adventurous spirit. And he put all of that into song and verse. He spoke as much through his skin as he did through a guitar.

He once said that his goal in making music wasn't just to do that, but to create literature. That speaks to me, man.

If only I could have an ounce of that in the way that I paint or draw, to convey what is on the inside to the outside in that manner, with that power, that would be something.

I read that he was still practicing his Tai Chi exercise an hour before his passing, trying to fight for his life. I couldn't even begin to imagine what his state of mind was at that point and maybe I don't even want to know, but that is a good example of a fighter, I believe. Someone with spirit, someone with a bite to him.

Lou Reed's passing  hit me in the same way as when Freddie Mercury died. It's hard to imagine that there will be no more new music to hear, but that is the way that it goes. I think that I will go and listen to Modern Dance (from Ecstasy) and let that sink in some more.
Posted by Bruce at 7:58 PM No comments: 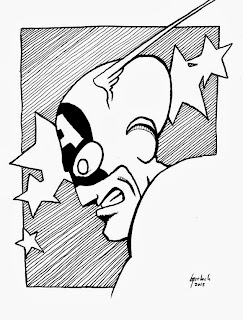 
Today's Friday Ink is none other than Captain America. I figure it's fitting since Detroit Fanfare starts tonight and goes through Sunday. I will not be there for Preview Night tonight as I will be at the Fox Theatre seeing Jeff Beck and Brian Wilson perform, but a few of my fellow artist friends are manning my table, so if you really wanted to pick something up you can. See all of you tomorrow!
Posted by Bruce at 5:42 PM No comments: 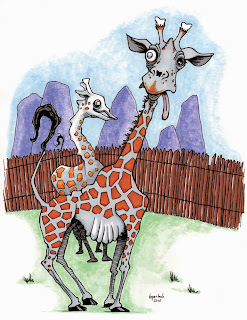 The other book that will be debuting at Detroit FanFare that I have a piece in is Zelda's Zombie Zoo written by Gary Reed and published by Binary Press. This is an all ages book, so even though it has zombified zoo animals, the gore and rotted flesh was kept to a minimum. So, I've been told. I've seen a few of the other contributor's images and there is a varied collection of zoo animals for your viewing pleasure. I will have copies of this book at my table in artists alley, so stop on by and get your copy this weekend.
Posted by Bruce at 8:10 PM No comments: 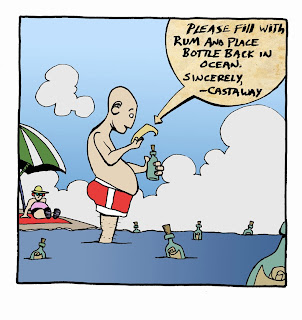 This Friday marks the launch date for a new web comic that I crated alongside Kevin Minor of Universe-M fame. Kevin does the writing and the coloring and I do the draw-w-wing. For the past four months we have been coming up with ideas, rehashing them, making them work the way we want them to work and now we will be able to share them with all of you cartoon loving pagans once a week. Stoopid Stuf is a cartoon by two curmudgeons who want to put our curmudgeony thoughts in a single panel to show you just how cranky and/or goofy we can be when satirizing life and all that stoopid stuf. So, starting this Friday toon in to Stoopid Stuf at www.stoopidstuf.com and we hope to be able to bring a chuckle or two to at least two of you.

We chose this Friday to launch our web comic to coincide with Detroit Fanfare, the premier Comic convention in the Detroit area, which will be held at the Adoba Hotel (formally, the Hyatt) in Dearborn, MI.
Posted by Bruce at 3:30 PM No comments:

The Book Of Tarot 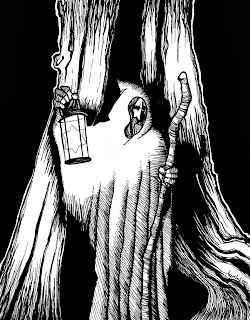 The Hermit
11x14
ink on bristol board

I have a few projects coming to fruition this week, so I will be updating on them throughout the week. The first is The Book Of Tarot, a collection that will make its debut this weekend at Detroit Fanfare in Dearborn, MI. All of the artists in the book will be on hand at the convention to sign their little hearts away. The book was put together by Gary Reed and printed up through his Transfuzion Publishing.

I chose to do The Hermit card and the above image is what it looks like. I wanted to incorporate a few different aspects, such as The Hermit himself, the tale of Diogenes of Athens, which lends itself perfectly with this card and the story of St. Gerlach, a dutch mercenary who lived in an oak tree after his journey from the Crusades. The tree replaces the mountain in the original card.

I've already seen a few pieces from this book and they have all been stellar looking, so if you are into anything Tarot, then this book is for you. Stop on by my table in artists alley and pick up a copy. 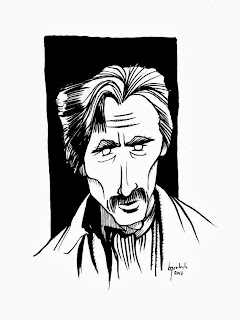 For today's Friday Ink I am keeping with the October theme and have Christopher Lee as Professor Karl Meister from the Hammer Films, The Gorgon. The Gorgon is a bit cheesy, but I really like this flick. They went all out on the settings and the lighting is just what I like in a 60's Hammer Films. Plus, besides Lee, the film also has Peter Cushing and a Medusa. What's not to like?
Posted by Bruce at 4:02 PM No comments: 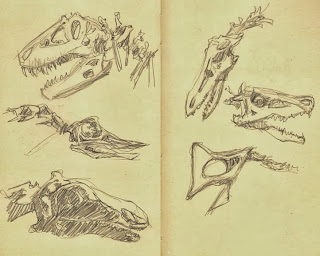 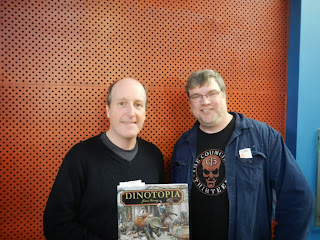 This past Tuesday evening found me at The Cranbrook Institute of Science to attend the James Gurney lecture that was in conjunction with the Lost World exhibit of over 30 complete dinosaur fossil skeletons. I arrived about an hour early and was the only person in the exhibit hall for some time, so I took a buttload of pictures and then did some sketching. You can see some of the better sketches in the above image. Before the book signing started I ran into fellow cartoonist James Anderson, so we talked comics and dinosaurs and all that good stuff. We were then lucky enough to be one of the first in line to get our Dinotopia books signed. Mr. Gurney is one heck of a nice guy and he took the time to chat with everyone who came out to see him. Once in the lecture hall we were joined by Mouse Guard's David Petersen and listened to James talk about his career as an illustrator and how he works, including research and building maquettes for his paintings.

It was a very good night and while there I also received some potentially good news, but will have to remain mum on that for now. Hopefully, I will have something awesome to report soon!
Posted by Bruce at 3:27 PM No comments: 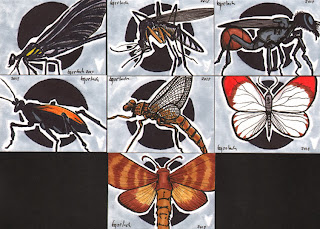 These are the last of my Insectae cards done for the Viceroy Cards set that is due out this month. Being from Michigan, I just had to include a fish fly, as we call the crunchy little critters. I have five Artist Proof blanks that can be commissioned, so if you want a bug card, get in touch with me and I'll do one up!
Posted by Bruce at 3:45 PM No comments: 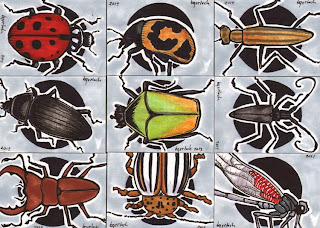 Here is another batch of the sketch cards that I did for the Insectae set by Viceroy Cards, which should be coming out this month. I will post the remainder of these next week.
Posted by Bruce at 12:03 PM No comments:

Friday Ink: the Creature From The Black Lagoon 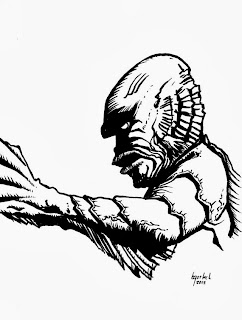 I began watching The Creature From The Black Lagoon last night and so, of course, it is fitting that I do said creature for today's Friday Ink. It's hard to believe that it has been about a month since I last did one of these, so I need to get back into the swing of things.
Posted by Bruce at 6:13 PM No comments: