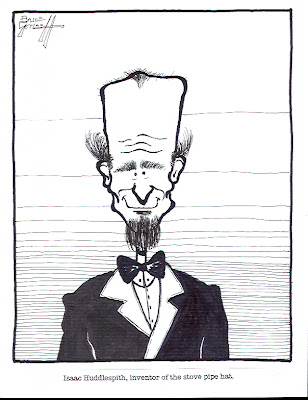 I just recieved my copy of the February 16th, 2007 issue of Medical Economics in which one of my cartoons spoils the otherwise fine publication. I just love seeing one of my 'toons in print and I hope that you do too (for those of you who do)!

Most of the cartoons that I do are very sarcastic or just me trying my hand at social satire or just plain grumbling on my part, but this cartoon was one of those simple ideas that is just plain goofy fun. The guy's name? No idea how that one popped into me noggin, but it did. I think it fits.
Posted by Bruce at 3:49 PM 10 comments:

Tree People and other things 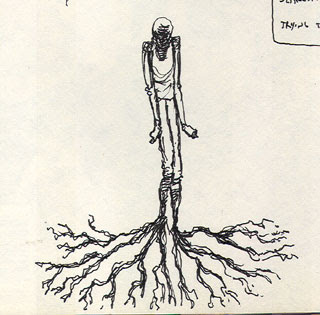 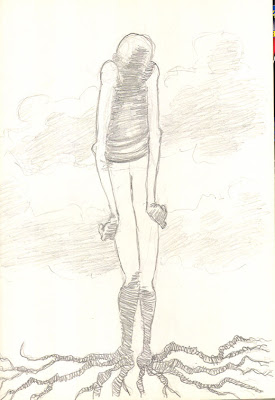 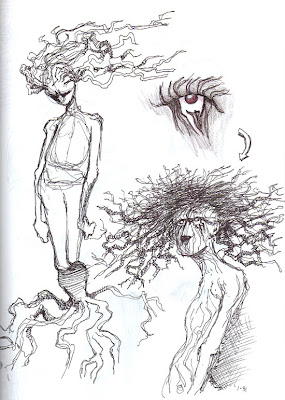 First I'll address the other things. The Dirty Show 8 wrapped up last night and although I didn't sell my piece it was a worthwhile experience. We had a good time at the opener and I want to thank all of my buddies for coming out on such a cold night. Dinner at the Roma Cafe and a, well, let's say, a very interesting night viewing some art that ranged from the ridiculous to very tasteful. Of course, the people watching was just as fun as viewing the works of art.

Next, I recently found out that at least one of my cartoons was selected for the 16th Euro-Kartoenale in Belgium. Previously, I had said that I got in, but apparently that was just for the judging. Out of 987 cartoonists from 84 countries in which 4000 cartoons were entered, only 250 were selected for the show, which will be held in April.

Now, on to the tree people. For awhile now, I've been tinkering with these rooted figures and have been exploring a theme of just what it means to put down roots, to grow and what does that mean to me. In an age where homes and neighborhoods have become nothing more than investments, just what does the phrase "putting down roots" mean? Neighbors are something different from when I was a kid and I think that people themselves have changed, too. So, what does it mean to grow and just how far can roots grow? They can only grow so far as the branches themselves, but they need nourishment and maybe that's all it's about.
Posted by Bruce at 8:10 PM 11 comments: 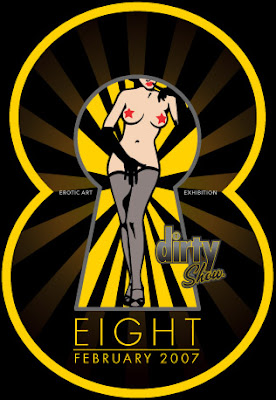 Just a reminder that this Friday, the 9th is the Dirty Show opener down at Bert's Warehouse Theater in Eastern Market in Detroit. The organizers of the show have extended the dates until Saturday, February 17th. I went down today to drop off my piece and got a good look at the building, but unfortunately I didn't get to see any of the other art works, as they were packed and crated and all that good stuff. So, I will have to be content with being surprised just like everyone else.

Also, I was pleasantly informed via the Dirty Show website that Giger will have a piece in the show and that Glenn Barr has done the art work for the poster. Very cool. 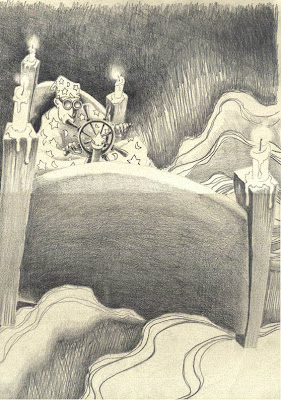 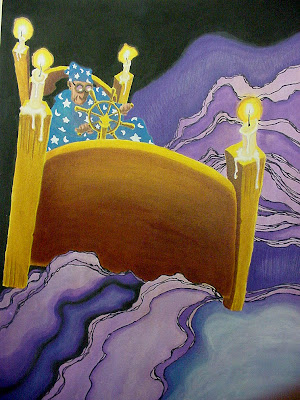 This is my latest painting and I have to say that I'm quite happy with it. The first image is the value study that was done to work out the kinks and as I recieved some much appreciated help from a few artists over at ConceptArt.org I made some necessary adjustments and preceded with the paints. This was a joy to do from start to finish, it was fun and challenging at some points.

So, for all of you Night Time Navigators out there, secure those pilot goggles, wear the appropriate head gear and fire up that bed, rocket ship, schooner, dinghy, or whatever and...
just dream baby.