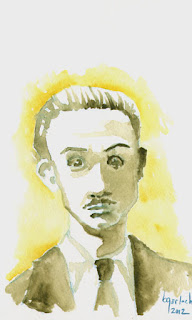 "The man who cannot visualize a horse galloping on a tomato is an idiot." - Andre Breton


The next portrait in my series of watercolors is none other than the Spanish surrealist Salvador Dali. I think, Dali more than any other painter has influenced the way that I think as a painter or an illustrator. Well, pretty much any thing I do, that is. When I was very young, one of my buddies parents had a copy of Dali's painting the Bread basket, from 1926 hanging in their dining room. Of course, I had no idea that this was a Dali painting at the time, not even knowing who he was. But I do remember on many occasions just staring at it marveling at the odd texture of the crust wondering just what kind of bread it was. Later on I would find many similarities between that textured crust and the cliffs of Cadaques, which he had as a backdrop in many of his paintings.
Another early encounter with a Dali image was when I purchased my first book of the painter's works when I was about 19 or 20. On the cover was the painting Dream Caused By The Flight Of A Bee Around A Pomegranate A Second Before Awakening (You just have to love the lengthy Dalinian titles!). Instantly I was taken back to a moment when I was very young. The tiger in the painting was used on a program when I saw the Shrine Circus at old Olympia Stadium in Detroit years before. That exact tiger leaping forward. I doubt that he ever gave permission for its use, but yet another unknowing Dali encounter.
So, fast forward to my early twenties and completely absorbing as much as I could about Dali's life and works. These were exciting times for me. I spent much time exploring the possibilities of surrealism and symbolism, which Dali was actually a painter of, especially after breaking with the surrealist movement. He however  remains forever their poster child. Paintings such as Autumn Cannabailsm, Meditation On The Harp, Millet's Architectural Angelus, The Spectre Of Sex-Appeal, The Anthropomorphic Chest Of Drawers, and The Invention Of Monsters challenged the way that I looked at art, including my own and the world. Beauty, horror, madness and genius all wrapped into one.
To this day I am always revisiting his works recharging my surrealist batteries and always rowing through some dreamscape or another.

In the above watercolor I chose to depict Dali as a young man wild-eyed and with a delirious future ahead of him.

If anyone is interested in any of these portraits they are available for purchase through the River's Edge Gallery in Wyandotte, MI.
Posted by Bruce at 8:42 PM No comments: 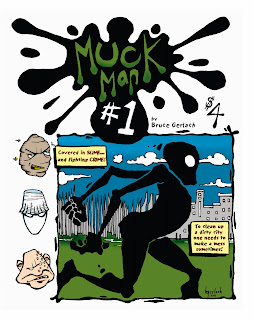 This Saturday, the 24th I will have my second con appearance of the season at the Son of King Kon, the comic, toy and non sports card show that will be held at the Allen Park Masonic Center. I will be debuting my first ever, all purpose, mega spectacular Muck Man comic! Yes, it's finally here and you too can enjoy the pulse pounding exciting adventure that is the man of muck. So, stop on by my table and pick up a copy! They'll make great padding for your rabbit cage at the very least. Other artists that will be on hand include Jay Shimko, Tony Miello, Gary Reed and Ted Woods! 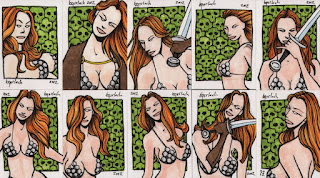 These are my Red Sonja Artist Proofs and the first two in the top row are San Diego Comic Con exclusives. If anyone is interested in purchasing any of them, shoot me an e-mail for the details.
Posted by Bruce at 5:39 PM No comments: 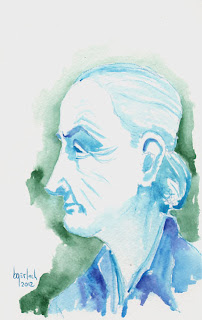 My next artist in a long line of inspirations is none other than Georgia O'Keeffe. In my late teens, early twenties I was already entrenched into the worlds of Auguste Rodin and Salvador Dali absorbing pretty much all that I could on their works and of their lives. I would often walk up to the mall bookstore just to peruse the many wonderful art books that lined the shelves. Oddly enough, there were more of these books than what one would have thought. I don't think I could find such a line up nowadays. They also had a good selection of Frank Frazetta and Boris Vallejo books, so I had plenty to look at.

Anyways, on one such trip as I was using the bookstore as my own personal library I had stumbled upon a rather large volume of O'Keefe's paintings in the bargain book section. Now, paintings of flowers weren't my thing and still aren't, but her images weren't just about flowers. They said so much more. You can believe that she was painting 'hidden' female genitalia as some say or you can see something else, the way that she took rather intricate objects and simplified them using abstract shapes, while losing none of the details. I decided to investigate further and bought the book. 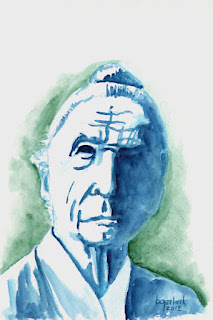 Whether it was the flowers, the skulls, the mountains, or the clouds, Georgia O'Keeffe's painting stirred something in me. Her paintings gave me more of an emotional response, a feeling,  as opposed to one of a storyteller. Or did they?

She capture the blue sky in my daydreams. 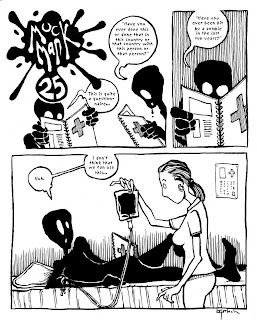 On to other adventures and antics...
Posted by Bruce at 3:17 PM No comments: 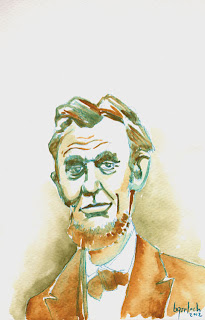 These portrait thingies that I'm doing are piling up, so I may have to either start posting them more often or doubling up on each post. Some are coming out better than others, but I thought to put them all up as some time to show all the goodness, warts and all.

This time up, it's Abraham Lincoln. Now, I pretty much despise all politicians, even the ones that I kind of support, and I know it's so much easier canonizing someone from the past because one can just gloss over the ugly parts and focus on what they want, but c'mon, this is Honest Abe after all. There are a few Presidents throughout our history that I admire or just plain find interesting and Lincoln is one of those guys.

Other than being the guy that had the cahones to abolish slavery, I do feel that he was an honest man and did his very best to be the man of character that we all have seen him as. Character in the face of the slavers, the country embroiled in a civil war and being threatened with being split in two, and from what I have learned recently, battling an illness that probably would have killed him had Boothe not done the job. Compare photos of him early in his presidency to those right before his assassination and you can see that there was more going on their besides a stressful leadership.

We can learn an important lesson from Lincoln, one that he knew then. That America must stand as a union and not be destroyed by a minority or fringe opinion. We are so polarized in everything that we do, that maybe we should look back to this important time and try to see just what Abe knew was best for us and the world. It's important for a democracy such as ours to exist. We need to find a better way.

He seemed humble and had a sense of humor, as can be attested by the painters and sculptors who he sat for during his time. And as an artist, what a face to portray in paint and clay! The profile, his nose, those ears and that expression, and add in all the attributes that made him what he was, it all makes for an interesting subject.
Posted by Bruce at 6:24 PM No comments: 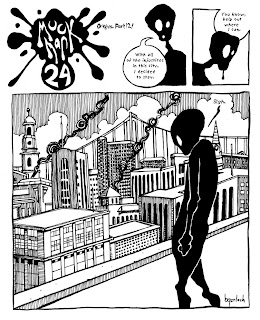 And this concludes the Origin story arc. This went on a bit longer than I thought, but like I said before, it kind of wrote itself. I drew the buildings in a jumble chaotic out of perspective heap to give it a sensation of chaos and confusion. I hope it worked.

The first 24 episodes are done and formatted and should be off to the printers very soon, so be on the lookout for the Muck Man comic!
Posted by Bruce at 3:37 PM 2 comments: