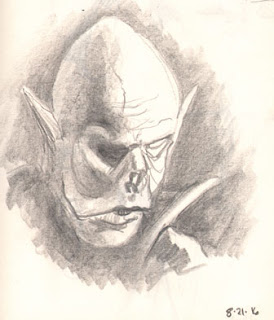 The new season of The Strain has started, so here is a sketch that I did recently of The Master. 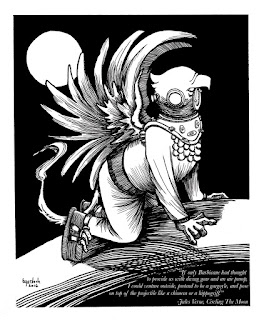 Sometimes I do really weird stuff. This is one of them. A few months ago I was reading Circling The Moon by Jules Verne and was inspired to do this drawing from the passage on the drawing. I wanted to take a black and white lifework approach that might have been appropriate for an illustration of that time. And for today, too. I plan on doing a series of deep sea diver drawings of this ilk, so look out! Click on the drawing to bigify. 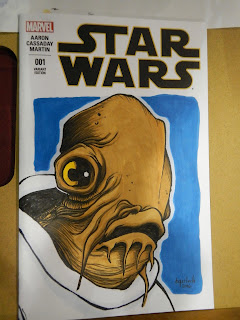 This was my favorite commission that I did at the Wizard World Chicago convention this past weekend. It was based off one one my sketch cards and wanted to make it better if I could, add a few more details that weren't on the card. The background is a different color, as well. 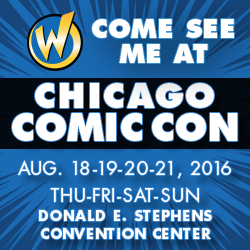 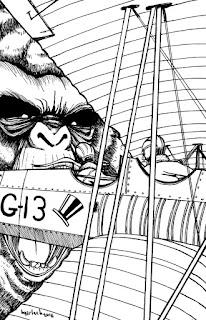 Tomorrow through Sunday you can find me in Rosemont at the Donald E. Stephens Convention Center for the Wizard World Chicago show. I will be in Artist Alley at table B5, right next to Action Joe Corroney. Besides the brand new King Kong print (which you can see the black and white version above), I will have the latest Stoopid Stuf book, other prints, official sketch cards, all the books that I have work in and will be doing commissions, as well. So, come on by and say hello! 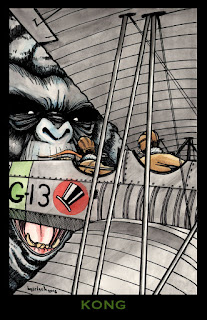 I will have a new print debuting this weekend at the Wizard World Chicago show in Rosemont, IL. I took a different approach with this one, using watercolor and ink instead of acrylic washes. Also, I intentionally made the perspective on the wings a bit wonky to try and create a little more dynamism and to give the impression that all is open on this side, but closed on the other. I'm not sure that I nailed it, but I think it works. The one small thing that I get a little giddy about is the spot where the gunner is looking back at Kong. I think I created a good sense of depth there. A very happy accident. 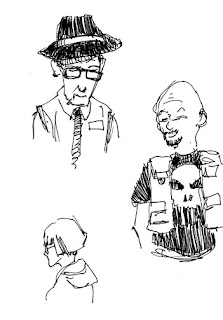 Here's a few sketches that I did during the day at last weekend's Michigan Comic Book Expo. A couple of fellow artists in Matt Feazel and Emily Zelasko and a con attendee. 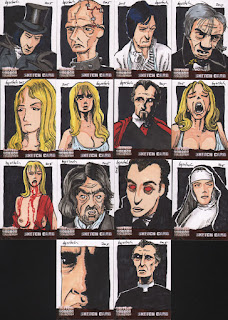 These are the sketch cards that I did for the British Horror Collection that was released by Unstoppable Cards last month. This was a fun one to do and and am very happy with how most of these turned out. 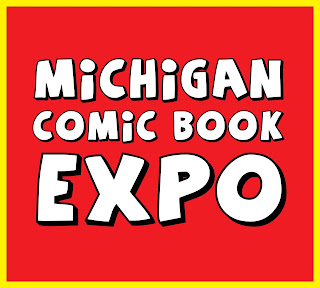 This Saturday is the Michigan Comic Book Expo and will be held at the Yack Arena (good name for a place to hang with some cartoonists) in Wyandotte, MI. Go to their site for all the pertinent info. There will be all sorts of good local and midwestern artists on hand, as well as some washed up wrestlers, if you're into that. WUW! Just having a little fun....

I hope that I don't get hurt. 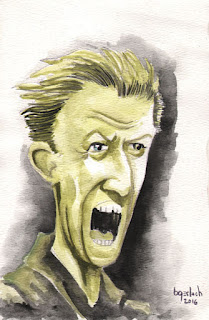 It's been awhile since I did one of my inspiration watercolors. This time, the person who I have drawn an immense amount of inspiration from is none other than the late David Bowie.

That still doesn't sound right, but there it is.

When he died I wondered why it bothered me so much. Being that this person I had never met. Not even close. I had never even seen him in concert, dammit! Then I read something on the internet about such things and it said that these are the people that help you define who you are, who you want to be, or like to be, for that matter. I liked that and soon realized the truth in it. Bowie was always there, really. I grew up in the seventies. Spiders From Mars, Ziggy Stardust, etc. This guy wasn't Zeppelin, The Who or The Beatles. He was pretty unique. Made one think about things. I remember sitting in a friend's living room one morning while he was getting ready to walk to school and we were watching MTV and Scary Monsters and Superfreaks came on. I remember thinking just how weird that all was, but just so freaking awesome. Fame, Starman, Fashion, Rock & Roll Suicide, Golden Years, Panic In Detroit, etc. These were all distinctly Bowie. I love the words as much as the music. A true artist.

In keeping with some continuity with these watercolors, I've stuck to the three color palette and am trying to get better and better with this. A few years ago while in Iowa, I came to like the paintings of Marvin D. Cone who was a friend and fellow regionalist of Grant Wood. On some of his paintings he used this color arrangement (white, black and yellow) and I loved it.

I sneaked a little blue in there, in case you didn't notice.