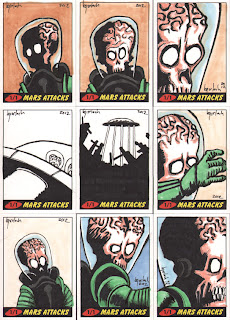 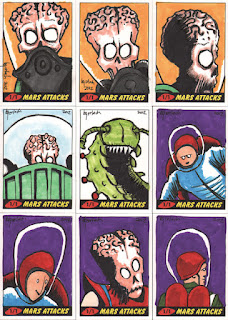 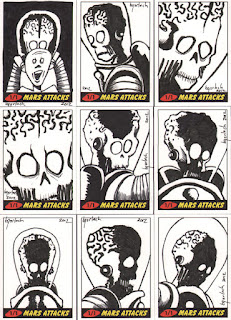 Here are a few of the 100 sketch cards that I did for the Mars Attacks set put out by Topps and should be out soon, if it already isn't. This set was unique in that it is based on the original 1960's card set put out then by Topps and not the 90's movie by Tim Burton.
Posted by Bruce at 12:29 PM No comments: 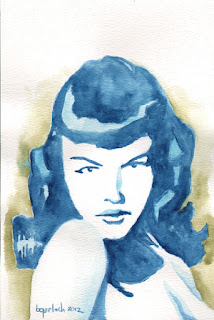 A recent commission based on the watercolor portraits that I've been doing. I learn a lot when doing these and after doing each one I can see where I should go differently on the next one. At least that's the plan!
Posted by Bruce at 2:54 PM 2 comments: 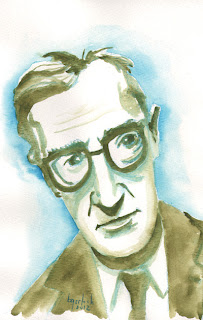 I suppose that my offbeat, quirky, pointless and sometimes irritating sense of humor comes from the many many movies that I've watched in my lifetime. Some of that had to stick, right? Well, Woody Allen films probably have a pretty big impact on what I think is funny. From the first time I saw Take The Money And Run when I was a kid, I was hooked. Seeing him as a kid thief and getting his arm stuck in the gum ball machine and running down the street with it to later on when he was breaking out of prison using a gun carved from soap, so that when it rained it turned all sudsy on him, was hilarious stuff. Throughout the 70's (Sleeper, Annie Hall), the 80's (The Purple Rose Of Cairo, New York Stories), the 90's (Mighty Aphrodite), the 00's (Whatever Works) to his latest films (Midnight In Paris), I have always found something funny, cerebral and quirky to hold my interest and to get me thinking. I look forward to what future flicks this man has in store for us.
Posted by Bruce at 3:05 PM No comments: 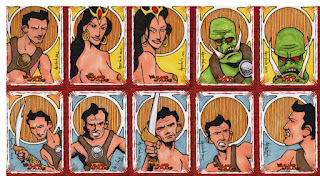 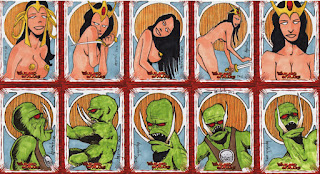 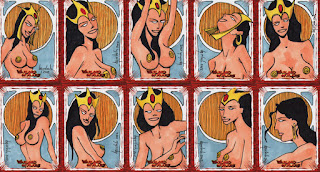 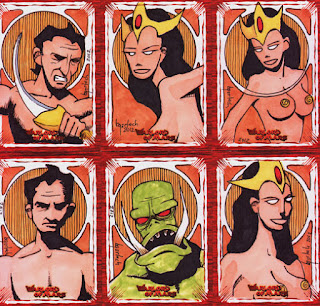 Here are all of the cards that I did for Breygent's Warlord of Mars set which is available now. The bottom six are my Artist Proofs. E-mail me if interested.
Posted by Bruce at 1:37 PM No comments: 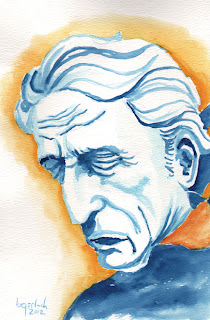 As a kid Jacques Cousteau fueled my desire for adventure coupled with my love for animals, especially those of an aquatic nature. Nothing excited me more than the possibility of one day jumping into the water to swim, study and film whales, sharks, octopi and all those other wonderful sea creatures. I thought that maybe that desire had faded over the years, but the more I thought about it the more I knew it hadn't. There were just other interests that piled up among the old ones. So many adventures, so little time...

Recently, I had the opportunity to explore the life of Cousteau a bit more by reading a biography on him. It was great to rekindle that spark that was ignited so long ago and to learn more about the man himself and what made him tick. There really aren't too many souls around anymore with his view on life and the world and that is a sad thing. Hopefully, his son Jean-Michael can carry on and inspire others the way that  his father did for me.
Posted by Bruce at 3:19 PM No comments: 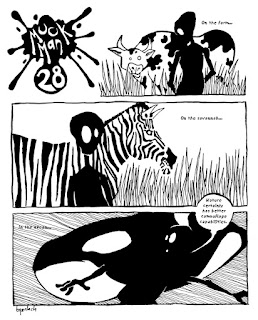 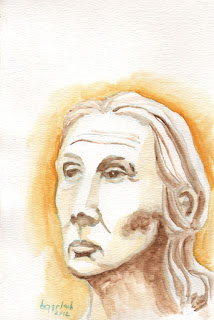 Back in the 70's and early 80's I used to absorb copies of National Geographic like a sponge soaking up anything I could animal related. I was always in the library looking up back issues or borrowing them from my geography teacher. One of my favorite's was the British primatologist and anthropologist, Jane Goodall. Back then I was a big fan of Louis Leakey, so Goodall was a logical next step for my interests. National Geographic always seemed to have plenty of articles about her and the research being done, so I always seemed to have access to her world in a vicarious way.

She always seemed to be a decent human being who brought a sense of compassion to the scientific community. Why more people don't admire this women is beyond me. She was definitely an important person in my formative years and I still have a great deal of respect for her and the work that her institute is doing.

A suggested book to read is The Ten Trusts by Goodall and Marc Bekoff.
Posted by Bruce at 5:49 PM No comments: