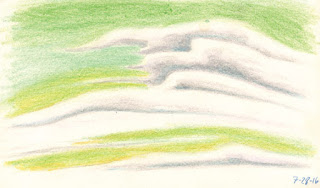 May all your skies be Salvador Dali skies and all your clouds be Thomas Hart Benton clouds. 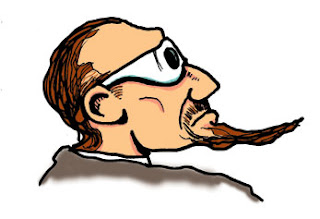 Before I start in on this  special person, I'd like to explain a little about the inspiration for these posts. I base my little cartoons on a graduation speech that the communications theorist Neil Postman gave awhile back on Athenians and Visigoths. It's a good read and like Postman says, this is not completely historically accurate, but are used as metaphors. I do the same with these cartoons. They are my way of dealing with the willfully ignorant among us in a fun and humorous fashion. But, I encourage all to read Postman's speech, it's food for thought.

So, on to the moron who graced my presence last week when I was on my way from Detroit to West Bloomfield to work on some private sculptures. I was in the far left lane and needed to get over to the freeway. No one was in front and behind was completely packed with cars, bumper to bumper. My choices were obviously limited, so I waited to see how traffic would go. No one was moving from their current positions, so I sped up a little with my turn signal on. The guy next to me was having none of that and sped up just so I couldn't get over. The cars behind him kept pace, so there was no going that way. He just wasn't going to let me over. Well, I made my way over after a bit, basically cutting him off and he immediately slowed down. What makes someone who is all alone be such a dipshit? I added color to this one because he looked oh so special with his thick, white 80's sunglasses, chin up, never moving his head one way or the other. I'm sure he thought he was the shit. 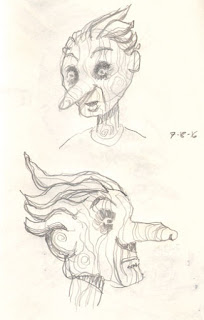 Recently, I watched the Disney version of Pinocchio, which I hadn't seen in years. It still holds a firm grasp on my imagination and the movie was done very well, although having not read the original story by Carlo Collodi, I've always know the original to be more involved and darker in nature. So, after finishing up Tarzan of the Apes I bought a copy of the original Pinocchio story and am now reading it. Of course, the imagery is wonderful and imaginative and I am loving it. How would I take on the image and looks of the bratty wooden boy? Not being a real boy and prone to stupidity and misbehaving, I thought to give him deep and dark eye sockets, before he was to earn his character, dignity and humanity. 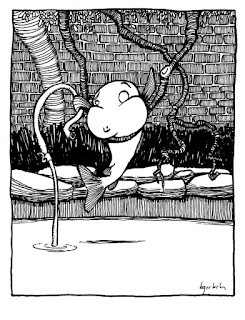 This here is a cartoon that I did last fall for a fundraiser to acquire funds to get an air compressor for the Belle Isle Aquarium. At least, that is what I think it was for. Hopefully, it wasn't to fund anything illicit. 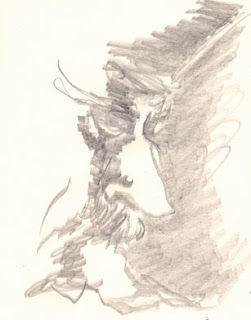 I haven't had much to show as of late because I am hard at work on a comic book collaboration with Bill Pulkovski and that is taking up most of my workload, so here is a sketch of The Baron. 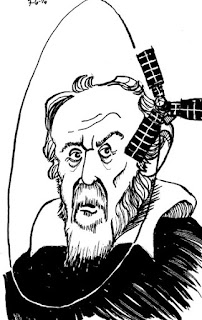 Or maybe Galileo's realization fulfilled would be a better description. Anyways, the Juno spacecraft obtaining orbit with Jupiter is some exciting stuff.

Last week I was able to view a exhibition that was curated by a guy that I have known for decades. The 1st Annual Greater Michigan Dementia Creative Arts Exhibition put together by sculptor John Wood and is being held in conjunction with a similar show in South Yorkshire, England. The theme of the show is 'The Senses' and how they relate to our memories.

A very interesting show by a variety of artists, young and old and bringing a better understanding to  those suffering with dementia of all kinds.

The show is being held at the Services For Older Citizens center in Grosse Pointe Farms, MI and will run all summer and I would encourage all to go and view this fine collection of artwork. The pieces are on view throughout the center in various rooms that covers two floors.

Here are just a few of the selected works in the show: 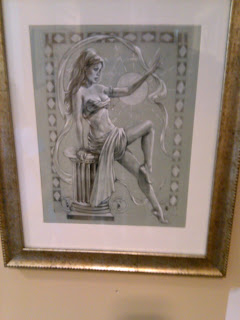 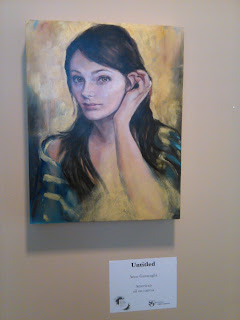 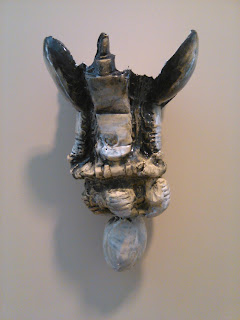 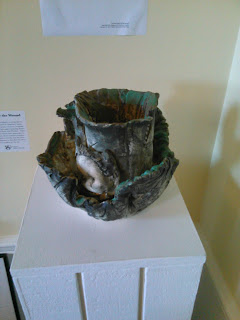 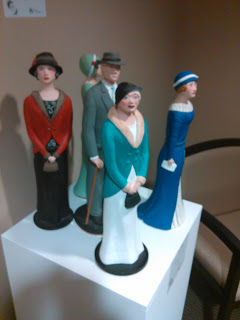 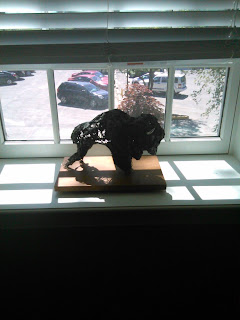 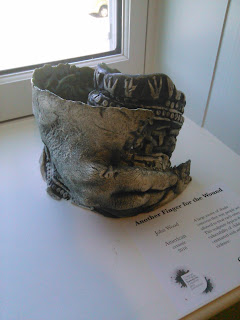 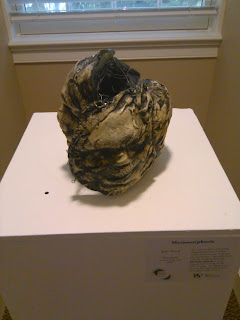 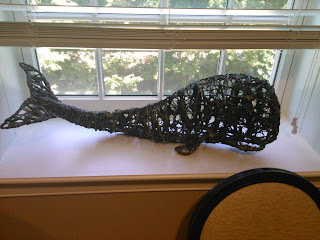 Below are a links to John and Anne's works: