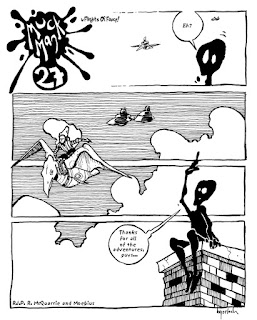 I'm a little late in posting this one, as it was done about a month ago, but here it is. A little tribute to a couple of illustrators who passed away a little over a month ago.

I don't usually fool around too much with panel layout on these, as I usually have a pretty good idea in my head before I start, but this one had me doing a few different layouts. It's interesting how a simple four panel page can look and feel so different from each other (as in different layouts), almost as if something else was being suggested.
Posted by Bruce at 4:08 PM 1 comment: 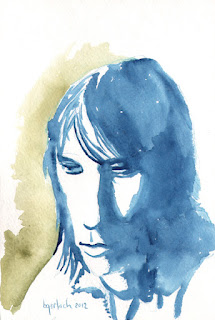 Without a doubt, Jeff Beck is my favorite guitar player, even edging out the likes of Jimmy Page, Steve Howe, Brian May and Joe Satriani, all type five, for sure. From the Yardbirds to the present he keeps on playing and experimenting with sound. I find that most of his later works were and are some of his finest material, especially the album "Jeff" and most recently his work with Imelda May. His need and willingness to work with people that you wouldn't normally think of as Beck material is another testament to musicianship and his dedication to his craft. This guy has experimented with all types and genres of music, from the doo-wop sounds of The Tridents to jazz fusion and the blues to electronic musings. This guy still continues to rock. A true artist. When I'm working away on a painting or some other such illustration, a Jeff Beck CD can usually be heard in the background providing me inspiration.

You can check out his latest meanderings on his official website.
Posted by Bruce at 1:25 PM No comments: 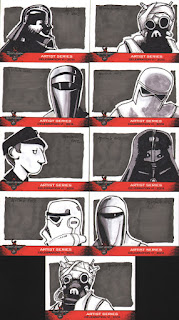 Above are the sketch cards that I did for the 501st Legion that will be distributed at this year's Star Wars Celebration VI, which will be held in Orlando, FL. I will be using the Dengar and the bottom Tusken Raider as my return cards, with the Dengar already being spoken for. These cards are one of two projects that I will have a presence with at Celebration, the other will be an altered clonetrooper helmet that will be auctioned off for the Make A Wish Foundation.
Posted by Bruce at 4:55 PM No comments: 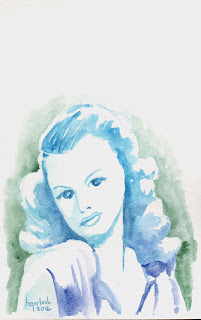 Today's water color portrait is none other than Rita Hayworth. As a kid, I would watch her movies and be in awe of her beauty. Here was a person traveling through time from her era to mine through my television set teaching me that certain things could, would and should be timeless. An important lesson for me. And also, that there really would be no one like her again. So, such things should not be dismissed just because they are from the past. Uniqueness can be timeless and only be a part of that time.

She had a troubled life, as such persons in her position would have and I don't really think that she ever broke free from some of the terrible things that happened to her. I would recommend the bio, If This Was Happiness by Barbara Leaming for all the details about that. Her one true love, Orson Welles got away, as well and they both admitted that this was their biggest mistake. Such tragedies for two such talented people who couldn't get out of their own ways.

My all time favorite Rita Hayworth movie is Gilda. She sizzled in this flick in that black evening gown dancing for her criminal husband in his South American night club. And in walks Glenn Ford as the hired protection and all hell breaks loose. Great cast and a great flick.
Posted by Bruce at 4:19 PM No comments: 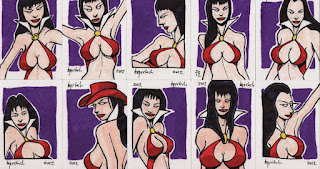 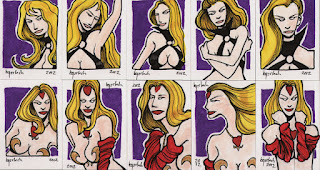 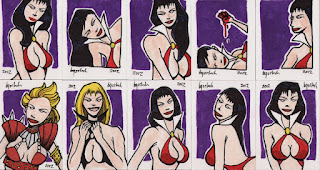 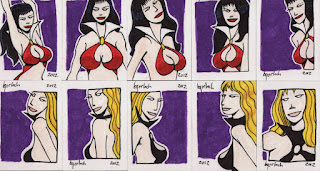 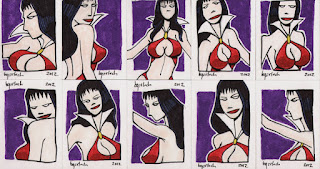 These are the sketch cards that I did for Breygent's second Vampirella card set that should be out now. These don't show the ten that I did for the San Diego Comic Con exclusive giveaway from Breygent. I'll show those at a later date, along with my Artist Proofs.
Posted by Bruce at 5:41 PM No comments: 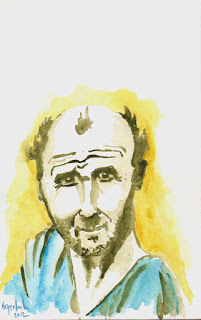 Gustav Klimt was one of those painters that had to percolate within me for awhile. Years ago, he didn't inspire me all too much, but when I finally did immerse myself into the world of Klimt, I found one filled with inspirations and beauty that I couldn't begin to imagine. The very thing that turned me off about him was the very thing that pulled me in. The gold leaf, the gold colors. Has there been another artist outside of eastern orthodox religious art that has used gold so effectively in their works? I'm not too sure that there has been one. At least not for me there hasn't.

The Faculty Paintings alone were works of pure genius in their imaginative scope and even his landscapes were great examples of expressing solitude and serenity, all while his other works were filled with activity and symbolism.

And you just have to love this eccentric fellow who painted in robes and liked his cats and went rowing in the summertime.

Contact the River's Edge Gallery in Wyandotte, MI for any info regarding these originals.
Posted by Bruce at 5:00 PM 2 comments: 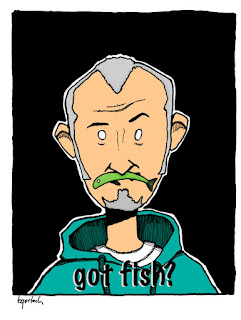 The Belle Isle Aquarium will be having their annual koi migration from their winter quarters in the basement to the outside pond this Saturday, the 7th, starting at 11am. So, if you are in the mood for some fish wrangling come on down to the island and lend a hand. This year there will be volunteer forms to fill out, so keep that in mind.
Posted by Bruce at 5:04 PM 2 comments: 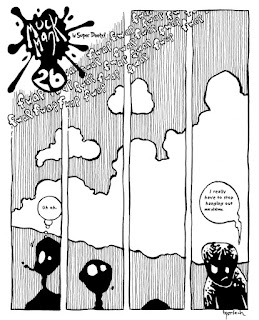