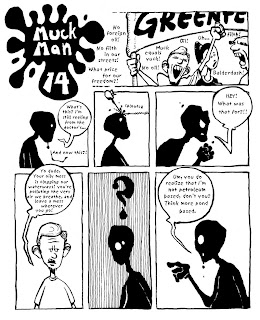 After receiving some good advice and direction for my Muck Man and ink.re.ments cartoon strips at the Summit City Comic Con a week or so ago, I have been eager to get the ball rolling and put these things out in a more timely fashion. So, here we continue with the origins of Muck Man.

This may appear as a slam against Greenpeace, but it's not. I'm actually a supporter of what they do. Just so you know.
Posted by Bruce at 11:55 AM 2 comments: 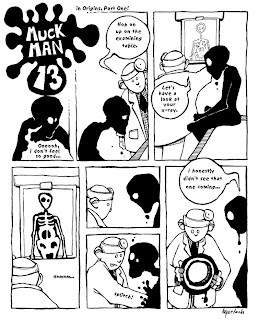 In this latest tale of  the Muck, we catch a small rubbery glimpse of his past.
Posted by Bruce at 11:15 AM 2 comments: 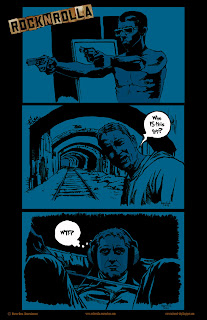 I've been tinkering with the idea of taking three scenes from a movie and drawing them up in a comic book panel style and presenting them in that fashion. A combination of two mediums that tell a brief story or set a theme from the movie in question. So, my first one is from the Guy Ritchie movie, RocknRolla, a great little film with some wonderful dialogue and one liners. Although, the words that I've provided here are not in the film, but what I imagine Gerard Butler to be thinking or saying in those situations.

I had a load of fun with this and it's a great vehicle for me to whip out the old brush and throw down some ink. And I hope that this comes across as something that is enjoyable to view. Gimmee some feedback.
Posted by Bruce at 11:31 PM No comments: