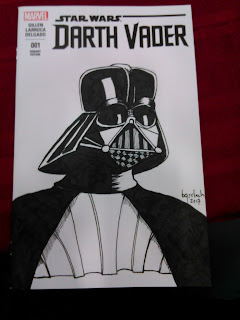 The pic is slightly blurry, but it is from a sketch cover commission that I did over the weekend at the Great Lakes Comic Con. Darth Vader is the culprit, as if ya didn't know. 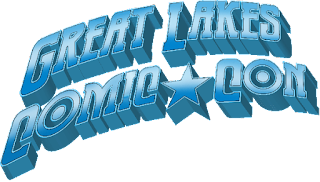 This Friday (5-9) and Saturday (10-6) I will be a guest at the Great Lakes Comic Con in Artists Alley. The show will take place at the sports complex at Macomb Community College, South Campus. You can check out all of the details on their website.

Besides having all the usual stuff like prints, books (Stoopid Stuf, etc.), sketch cards and original art I will also be doing commissions. Stop on by and say hello.

Delays On The Porter Line 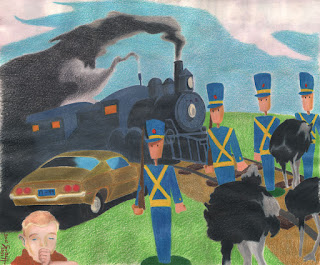 I'm posting this colored pencil drawing that I did back in 2001 because I've been having a few dreams that involve my grandpa and this piece is about my grandpa. Now, I hardly ever have dreams where someone that I know is in them, especially relatives. I don't know why, but it's true. In the past few weeks I've had  four dreams about my maternal grandfather, the woodworker. In every one, it was him through and through, the way he talked, his mannerisms, the way he dressed. Well, not everyone. In the last dream he was wearing cabana wear, something he would never have done. I do like to think that after all this time he finally came to visit, but who knows how dreams work.

This piece above was done about two years after he passed away. I was thinking about how family really made it a point to get in his way when he faltered there at the end and how he responded was always with calmness. He was hugely into trains and model railways (his basement set up was an amusement park), so the train here represents him in a way. I borrowed from one of my Thomas Hart Benton's paintings for this part. The train, smoke and sky are in that style if not a plain ripoff. The toy soldiers were something he and I experimented with in my youth. Making molds and trying different substance for the soldiers. Just to see if they worked. Hardly any of them did, but we had fun. The ostriches that are blocking the way with their heads in the sand are family. I felt this of them during these times. The Camaro was one of the two that he owned. The other one, also gold, had a spoiler. He didn't act like an old man, that is for sure. The little guy down at the bottom there is me as a really small kid. I always felt helpless to act and not knowing what to do to help him, so yeah, there's that.

The drawing was damaged some during the last basement flood, so the scan is a bit wonky.

Oh yeah, this piece also won an Honourable Mention Award at the 1st International Drawing Biennale in Melbourne, Australia in 2001. I look at it now and kind of cringe, but happy of the award nonetheless. 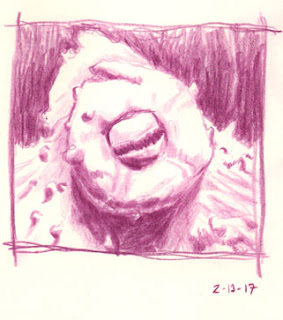 This here is a sketch of the eye of an octopus, one of my many spirit animals. These eyes sketches, if you have been paying attention, will be part of a larger piece that I have been tinkering with. Stay tuned. 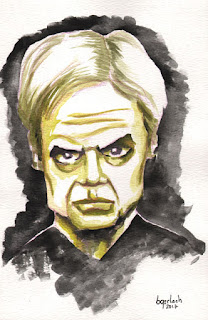 If Edward Gorey showed me that one can laugh in dark places, H.R. Giger showed me that there is something in the darkness. The first time that I saw his artwork was from the album cover art  for Emerson, Lake & Palmer's Brain Salad Surgery and it both mystified and captivated me. I had a hard time wondering just what was going on here (it was much later that I learned what the title meant, not sure if that was what Giger meant, though). His work, among the most famous, his designs for the alien in the Alien movies, had me trying to figure out if it was about horror, lust, darkness, etc. Should I be afraid or aroused? More afraid than aroused, I think. The Swiss artist, who passed away in 2014, had an imaginative like no other, but what can you expect from a guy who slept in his bathtub.

I'm sure he was a lot nicer than how he looks in my watercolor.

B-17 Sketch by George Gerlach 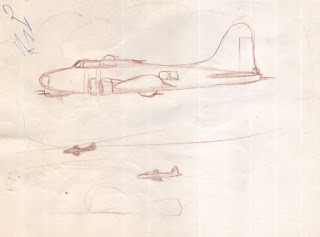 My grandpa never really talked openly about his WW II experiences when I was a kid, although he did end up sharing a lot with me later on, which I am grateful for. We all knew that he flew in a B-17, but never knew just what he did or where he was positioned, so I asked him at a family gathering and he drew this quick sketch for me. Up on top was where he was stationed.

This was done in the late 70's to early 80's. Another treasured artifact that needs a frame. 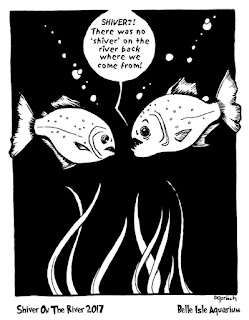 The annual Shiver On The River event held on Belle Isle will be tomorrow (the 4th) from 10-4. I do believe that most of the buildings will be open and having fun things to do and see, including the aquarium, where you can see the latest additions, red bellied piranhas.