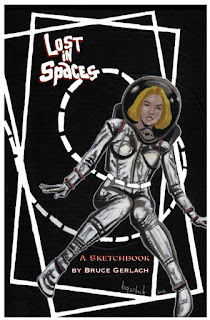 Friday evening will find me in Ypsilanti  for the Comics, Cartoons and Caricature show and the following day I will be in Lansing for the 2013 MSU Comics Forum. This will be my third year at this unique show focusing on the art of comics and will feature such artists as Jay Jacot, Ryan Claytor, Bill Pulkovski, Tony Miello, Jay Fosgitt, Chad Sell, Joe Foo, Jeff Manley, among many other wonderful talents.

I will be unveiling my 2013 artist's sketchbook (finally!) at this show, so if you collect such things, this will be a chance to pick one up. Everything in the book are directly from my sketchbooks, raw and unpolished. as they are. Most people do not get to see the scribbles from the sketchbooks, so I was happy to go that route.

So, if you are in the Lansing area on Saturday, stop by and say hi, or eh, or whatever. 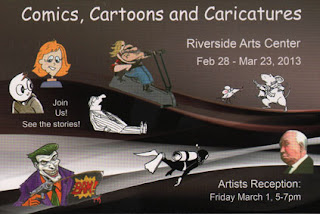 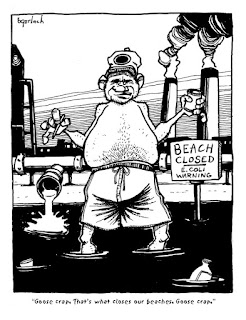 The Riverside Arts Gallery in Ypsilanti, MI will be hosting a show called Comics, Cartoons and Caricatures, in which I will present eight samples of different kinds of cartoons that I do from single panel gag toons to full page ones, such as Muck Man and ink.re.ments. Other than myself, the show will be represented by more Michigan cartoonists, such as Dave Coverly (Speedbumps), Phoebe Gloeckner, Birgit Keil, Carl Lundgren, Tony Miello (Gapo The Clown), Mike Pascale, Nate Pride, Jesse Rubenfeld, Harley Schwadron, BK Taylor, Mike Vosburg (Archer & Armstrong), Aaron Warner and Gale Williams.

It all begins this Thursday and the Artists Reception will be Friday, March 1st from 5-7pm and the show will run through March 23rd.

www.riversidearts.org
Posted by Bruce at 6:09 PM No comments: 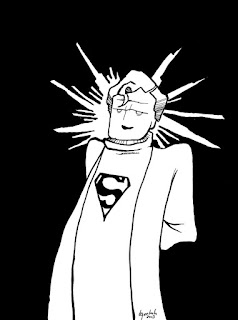 Jor-El
9x12
ink on bristol board


Oops. Friday Ink is a day late. I was busy getting some work done for a couple of upcoming gallery shows and it slipped my mind that it was even Friday. So, here is a Friday Ink on a Saturday.

A while back I came upon an image of Marlon Brando as Jor-El in the 1978 Superman movie, liked the all white wardrobe and thought it would look good with an all black background for some contrast. Add in a little Krypton design element and Jor-El is good to go. 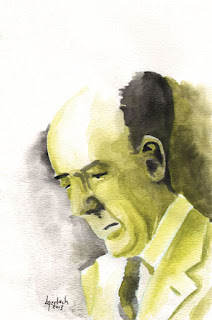 
Next up in my inspirational watercolors is none other than Edgar Rice Burroughs. I have a few writers on my list and he nears the top of it. His creations range from the jungles of Afica (Tarzan) to the far reaches of Mars (John Carter)  and it was once said that if you read a Burroughs tale that took place in a humid jungle, then you would be soaking wet after reading it. He was very descriptive in his environments. And though many were critics of his style, I found myself immersed in his worlds because of this, as if I were really there.  Or at least he was. That was his magic.

His Warlord of Mars series began in the early 1900's and I can never help but think of what people originally thought of these tales. What an imagination!

I'm currently finishing up the last book in his Caspak series with Out of Time's Abyss and wonder why this one wasn't made into a movie as with the first two (The Land That Time Forgot and the People That Time Forgot). Maybe it was, but went straight to the sci-fi channel (I refuse to spell it the way it is now...).

With this watercolor I experimented with the limited palette once again, but this time tried using three colors that the Iowan painter Marvin D. Cone used in some of his door paintings. White, black and yellow. The next few may be with this same color scheme as I try to get it to where I want it.
Posted by Bruce at 2:49 PM 2 comments: 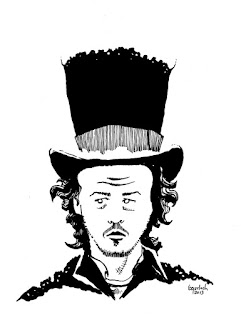 So, for today's Friday Ink I chose to do Curtis Armstrong's character from Better Off Dead, Charles De Mar. Not too sure about the likeness. However, I do like how this came out, so let's just say it's De Mar-esque. As with each Friday Ink drawing, this original drawing can be yours for $30 mailed.
Posted by Bruce at 10:57 PM No comments: 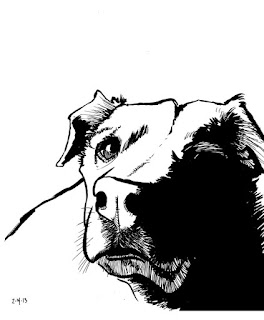 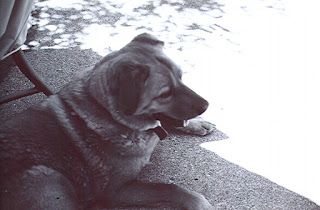 Reggie, Regman, Regolicious, Regomatic For The People, Refrigerator Raider, Poogee... he had a hundred names and seemed to enjoy having so many monikers. Well, at least I like to think that he did.

Of all the dogs that I have ever had in the household or met period, Reggie was by far the best. We never had to train him in any, way, shape or form. He was complete when we rescued him at 6 months old. From that first day that I let him loose in the yard and he treated every single flower bed as his own personal slip n slide, and then ate all the evidence, he knew he was home. He lived a complete life of happiness and even though we tend to spoil our dogs, he brought his own contentment to the household. Reggie was never a predator in that he never attacked or went after squirrels, birds or rabbits. He liked crickets and would watch them hop around, but for some reason did not like beetles and would smash them flat with his nose whenever he saw one. He did eat a big ole carpenter ant once and the ant bit him on the tongue and its head stayed there until I had to remove it. He would lay in the driveway on a summer's eve with birds hopping all around him and he would just watch them.

Reggie had these big, brown, thoughtful eyes and always seemed to be in a pensive mood. And he was completely in tune with us and sensitive to everything. Not long after my grandpa died I came home from work after having a bad day. Things just caught up to me and I collapsed on the couch and just sat there sad as all hell. Reg walked in front of me, took a look, then hopped up on the couch right next to me. He sighed and then leaned on my shoulder. He just knew.

I have a thousand and one stories about him and have bored many with them. His personality was better than most people I've met. He was a character through and through and he took care of us as much as we took care of him.

Old age finally caught up with our little tank and he left us yesterday. I guess he went as peacefully as we could make for him, but it still sucks. He was awesome.

I think Mark Twain said that he wasn't much interested in a heaven that didn't include dogs. I couldn't agree more.
Posted by Bruce at 9:51 PM No comments:

Blue Intent
6x20
acrylic and colored pencil on illustration board

While not in Detroit's Dirty Show this month, I do have something dirty for all of you perverts. Well, not really dirty dirty at all, but you know what I mean. I chose the thin working space to experiment with just a slice of the picture.
Posted by Bruce at 2:31 PM No comments: 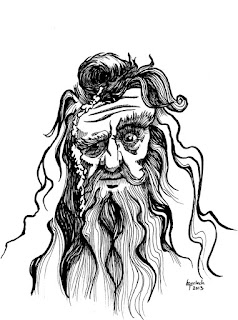 I just loved the character Radagast in The Hobbit movie. He was the right amount of quirkiness (including a large amount of bird poop), yet seemed to be a formidable wizard. So, I had to give a go at a drawing of him.

While I was doing this drawing, I thought that I would try something new. A few artists pick a day of the week and do some kind of artwork for that given day and then offer it up for sale. I think I'll give it a shot. maybe I'll call it something like Friday Ink and focus on just that, ink drawings. For a flat rate of $30.00 I'll ship this to the first interested party anywhere in the US (maybe a little more for international). And each Friday I will pick a subject from pop culture mostly and post it for sale. Contact me if interested!
Posted by Bruce at 1:22 PM No comments: 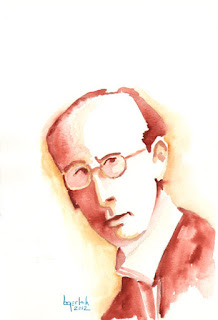 Arthur Rackham was one of those artists that was a huge influence on me far before I realized that he was a huge influence on me. My childhood, as for many others, was filled with his images of elves, goblins, dragons and mermaids, all the good things necessary for a right good adventure. In fact, his artwork for these tales always seemed to me to be the authoritative voice for all of these things, as if the artwork itself was a deep part of the folklore and fairy tale passed down through the ages. He was the camera that followed Alice down the rabbit hole and watched as Seigfried slew the dragon Fafner.

His use of mixing charcoal and watercolours was a revelation to me when hearing of it for the first time. Such a unique combination that worked so well for what he was representing.

I had debated whether or not to post this watercolor, as I felt uneasy about it, not quite hitting what I had hoped to achieve. But, the more I looked at it, the more I thought maybe I'd show it. After all, I have never been the best barometer of my own work...

I do see now what I could have done differently, so all is not lost as far as learning from it. Now, if I could only borrow one of Rackham's elves to help me with the details...
Posted by Bruce at 3:47 PM No comments: 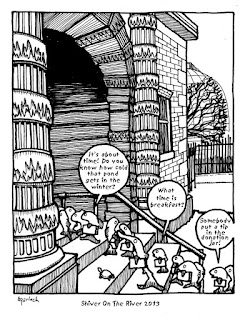 This Saturday, the 2nd of February Belle Isle will be having the annual Shiver On The River event and most of the buildings on the island, including the aquarium will be open and will have activities and such. The aquarium will be open from 10-3 (probably later than that if the crowds are big) and their will be plenty of volunteers on hand to help you and give answers to your questions.
Posted by Bruce at 6:04 PM 2 comments: