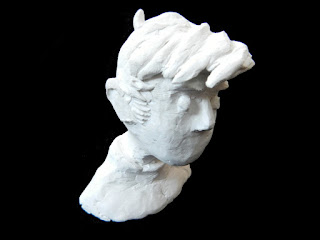 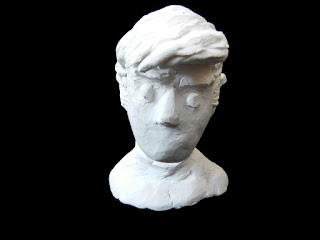 As I was drawing (and now inking) issue #2 of my Second Star comic I was becoming a bit frustrated with the way that I drew the character Holden from the front and then to a profile view. I've never been happy with that transition. It was the hair that was throwing me off. I had a similar way of doing things way back when, when I was doing a comic strip called Wade's World. So, I decided to fix that for future issues. I made a small bust of Holden so that I could see the transition from front to side, to see how that flop of hair looked from different angles. From the front, he looks the same, but now the issue from the side is solved. And I'm hoping that the drawings take on a more sculptural look to them, even though they are very cartoony.

So, shall I do some more sculpting for all of the characters? Probably so. Many problems can be solved, not just with the shapes, but lighting, as well.

Oh, and I changed that cowlick on the back of the head some.

These are some sketches from this past Saturday's sketch night at Rainy Day Art Supply. Our model this time was Autumn Decant. 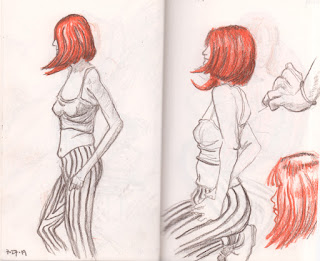 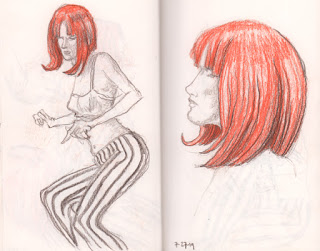 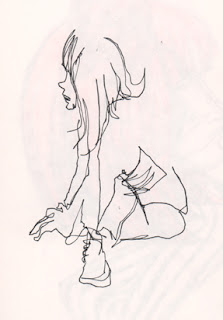 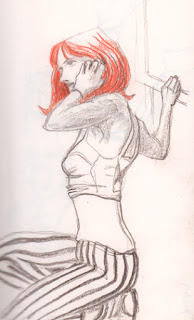 Some of the area's finest creatives amongst us that night: Our host, Kelly O'Hara, Darin Palmer, Kevin Minor, Jason Westlake, Jay Fosgitt, Jim Anderson and Jay Shimko. Check out their art! 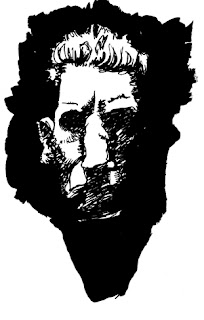 The Tank Is Almost Empty 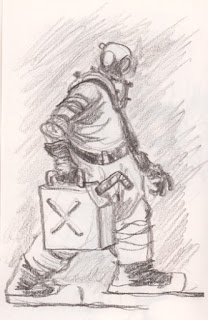 I'm happy with this sketch, even though it is something unfavorable. I think I captured the feeling of being minimalized, which is what I've been feeling as of late. Hopefully, this guy can find a gas station down there in the dark depths. And not get swallowed up by something, as well.

As I'm making my way through the inks for issue #2 of Second Star I'll be sure to post some of the characters that will make up this story arc.

This is Buffy and as the same as the character Deepo, she is modeled after someone that I went to high school with (K through 12, actually). Of course, Buffy is not her real name (although, the nickname that she did have was kind of similar). Her looks are not how she looked either, but I always felt that she had this Adam Ant/Duran Duran vibe going on, so this is a tip of the hat to that.

Issue #1 is available through me (just send a message!) and hopefully, issue #2 will be out and about before the end of the year.

Here are my Artist Proof sketch cards for contributing to the Artist's Choice set recently released by Viceroy Cards. The links are below. 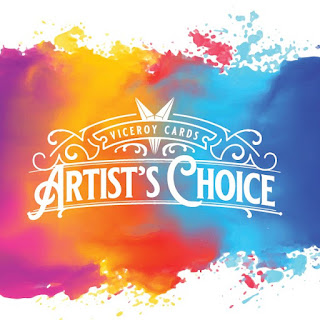 Below are the sketch cards that I did from Viceroy Cards just released Artist's Choice set. This means, of course, that it was our choice as to what we wanted to draw, as long as no one has the license. I chose to do animals as people, or people as animals. It could go either way. I even gave them silly names (stupid, really), which are on the backs. I'll post my Artist Proofs soon. 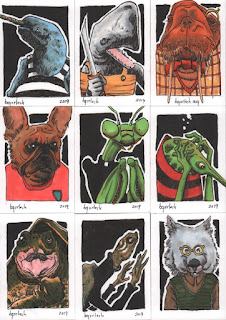 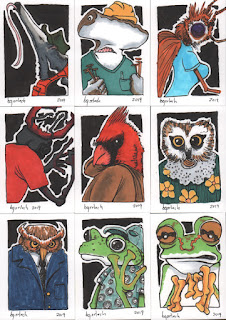 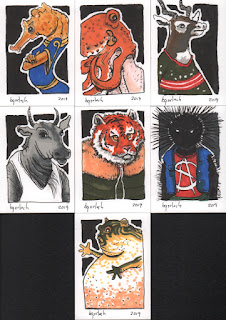 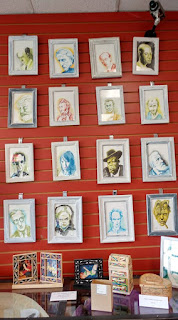 For those that might find themselves in the vicinity of Rainy Day Art Supplies in Grosse Pointe Woods, MI, some of my watercolor portraits from the Facets of Inspiration show that was on display at the River's Edge Gallery in Wyandotte will now be available to be seen and purchased there. The River's Edge still has some of the portraits, so one can always head over there, as well.

Thanks to Kelly and Rainy Day for being so accommodating! All of your art and framing needs can be met there, as well, so head on over! 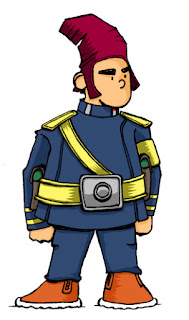 This guy here is a minor character in the forthcoming issue #2 of my comic, Second Star. He helps push along a resolution to a long seething conflict between two other characters and in doing so helps the adventure along.

As most of the main characters are modeled after people that I know or have known. Deepo is based on a guy who I met in high school and through odd circumstances, I still see from time to time to this day. This guy was one of the first people who I met that also read Heavy Metal magazine and his sketches from that time had that very European feel to them. So, the hat is a nod to Moebius, who as you know, was ubiquitous to Heavy Metal Magazine. The name Deepo is a reference to Moebius, as well. Deepo is the name for the bird-like creature from The Incal. His last name is a contraction to his actual last name, so there's a teaser for ya.

The uniform? That is from the character Tan Divo from the animated series, The Clone Wars. And that is because Tan Divo looks and talks just like this friend. I have no idea why I chose orange shoes. It just fit with the color scheme, I guess.

So, I hope that you enjoyed this little bit of trivia from the comic and I plan to post more tidbits like this as I go along.

I don't have a store yet, but if you are interested in purchasing Secon Sta #1, just shoot me a message or an email and I will get one out to you.

This past Saturday was Rainy Day Art Supplies monthly gathering to sketch from a live model. I was eager to get back at it because I missed last month's gathering due to a comic convention. This month's model was one Stacy Buck who did a great job as a pirate. She even brought along her two dogs, which always sits well with me. 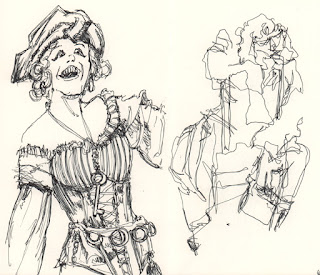 The sketch on the left is a blind contour, which means that I didn't look at the paper, nor lift my pen. This practice is good to hone those observation skills. 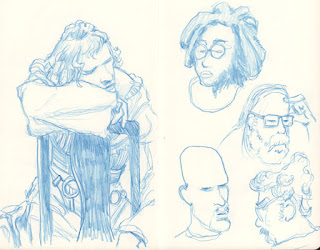 On the left are sketches of some of the artists taking part. 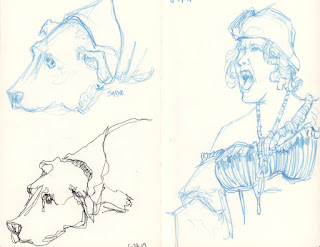 Sadie the Dog on the right. 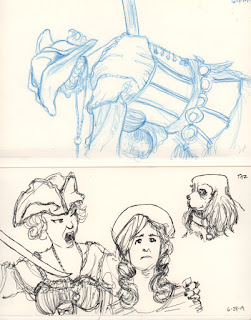 Our host Kelly was able to join in on the action, as well as the other dog, Taz.

Among the artist taking part in the festivities was our host Kelly O'Hara Nemzek, Darin Palmer, Jay Fosgitt and Jim Anderson. Check out their art.