Not to overshadow the post about my Uncle, but today marks exactly ten years ago that I started this blog. Ten years. Yikes! So much has happened and so much has not happened, ha, ha... 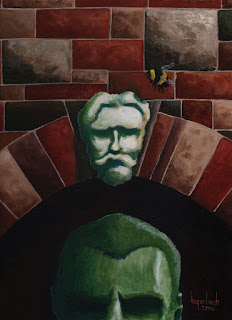 This is the very first image that I posted on December 31, 2006. It's called The Keystone and is still one of my favorite pieces that I've done.

Thanks for coming along for the ride.

A couple of days ago, my Uncle Chuck passed away at the too young age of 70. He was a good guy with an adventurous spirit and filled with childlike wonder. He was a creative guy who did cartoons, had his own dark room in his basement when he was into photography and one who I could talk to about all things art, movies, politics, history and music. We could agree on so much, but when we didn't, I think we could understand where each was coming from.

He was also up for all sorts of activities. Back when I was in my mid twenties and he was in his mid forties he would come out with me and my friends and play paintball in the woods. Age wasn't a problem for any of us, they accepted him and he accepted them. And we had a blast.

There was no one in the family who supported me more with my artistic endeavors. He never passed up a chance to read my cartoons, give me a quick critique if there was something obviously off (which happened quite a bit), but most important of all, he got them. I guess he was ok with my weirdness. And soon, I liked my weirdness.

He and my Aunt Janeen were the ones that I talked music with. They turned me on to so much coolness and we spent holidays and other family gatherings talking about what we were currently listening to, old favorites and all that. I don't think I'll ever find someone to talk to that was as passionate about music and talking about music than he was.

He was a smart guy who never stopped learning and having a good time. He will be missed. 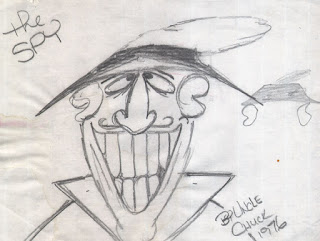 A sketch that my Uncle did for me when I was ten. You can see the tiny sketch to the right where I began a copy. 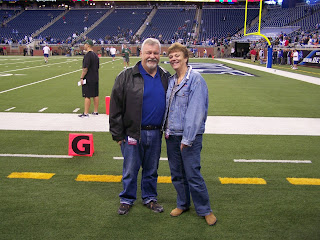 My Uncle and his wife during better times. 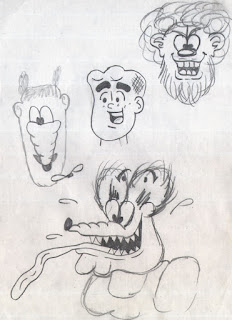 Another set of sketches done on the same day as the above one. Here he was doing up some characters, such as Archie and Rat Fink. I think the soft lead doodle to the left is one of my shabby attempts. I think that he was trying to instill some Mag Magazine influences upon me at this time in my life. It didn't take too much coercing.

A Michigan To Texas Birthday Wish 2016 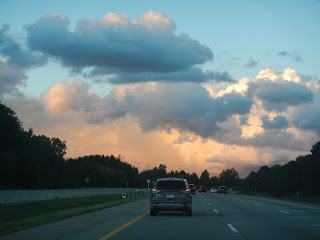 Each year my friend Sandra collects photos from her internet friends for her birthday. This year's photo was taken last August on my way back from Chicago. So, this was somewhere in southern Illinois and soon after this pic was taken the clouds formed a tube of sorts and the setting sun shone inside of it and it seemed to be on fire. Unfortunately, the pic that I took of that was too blurry. 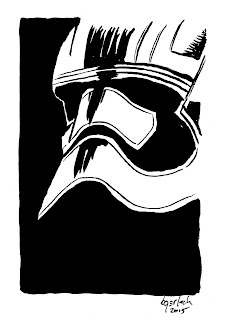 Everybody needs a little Star Wars this holiday season, right? Here's a drawing I did last year about this time of Captain Phasma from The Force Awakens. 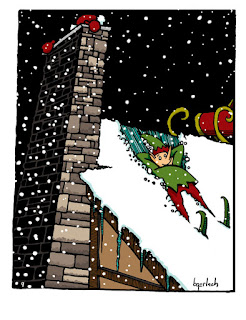 No matter how you celebrate, do it well, do it with joy and do it safely. All the best to you and yours!
Posted by Bruce at 12:24 PM No comments: 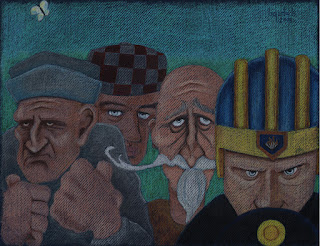 I was thinking about this drawing recently that I did in 2005, so I thought I would share it with Electronic Land, since I probably can't show anything new until the new year.

Can you name each 'prisoner' and why they are considered so?

Labels: Blast from the Past, colored pencils, drawings

Rogue One, Series One Sketch Cards 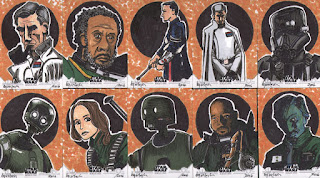 Now that the new Star Wars movie is out and the new card set by Topps has also been released, (just today, actually) I can show some of the work done for it. These are a few of the cards that I did for this set. Series Two is coming in early 2017. 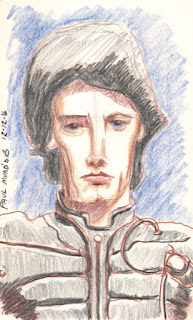 And one last one to the Dune sketches. Well, maybe a Baron Harkonnen is in the future, but we'll see. This here is Paul Atriedes. Muad'Dib to you.

He had blue eyes, so help me God, blue eyes!

How's that for a vague Christmas reference? 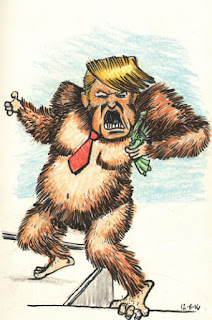 So, soon after the election a buddy of mine had this idea for a Trump toon. His idea was to have Trump as Kong climbing the Empire State building and in Fay Wray's place, the Statue of Liberty. I liked the idea, as I'm sure many more similar to this by many cartoonists will be coming, but I chose the 1976 version of Kong on top of the World Trade Center buildings, mainly because I thought Kong's gut would look funny with an orange Trump gut. So, yeah, he's orange. Of course.

And there's little hands, as well. 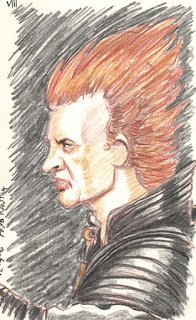 Up next in the Dune sketches is my take on the Feyd Rautha character played by Sting. He kind of has a Heat Miser thing going on. 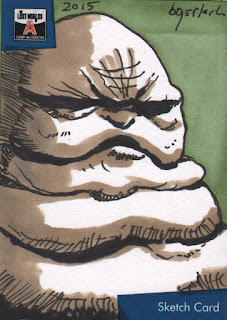 This here charmer is my Artist Proof/Return Card for doing the Lost Worlds Of Gerry Anderson sketch card set put out by Unstoppable Cards. Below is the eBay link if interested: 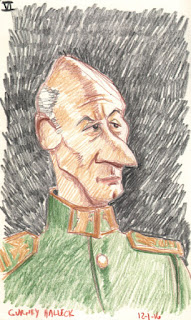 More Dune sketches? Sure, why not? This here sketch is Patrick Stewart's portrayal of Gurney Halleck. Perhaps, I'll do Sting's Feyd next.