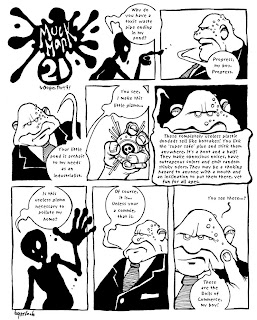 So, I got a little derailed in October and November due to an illness and some deaths and it seems like it's been ages since I last did a Muck Man tale. So, it was nice to get back into the swing of things and get going on this again. Also, my very first Muck Man comic book will see the light of day very soon as I am putting the finishing touches to this. Details coming soon!
Posted by Bruce at 6:16 PM No comments:

Star Wars Blast From The Past Comicpalooza!* 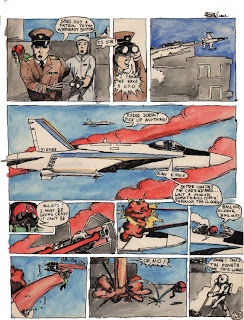 *for lack of a better title...


Two posts back I showed a sketch from my childhood, so why not keep it going this time? When I was digging through my old drawings I came across this Star Wars satire comic that I did when I was 17. Such a witty young lad was I... Sad to say that I don't think my cheesy sense of humor has developed much since then.
Posted by Bruce at 2:08 PM 2 comments: 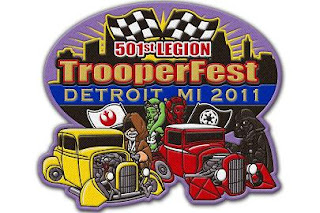 The 501st Legion's Trooperfest is going on now and I will be one of only a few artists on hand. I have yet to see who is actually attending, but I do know besides myself, Chris Trevas and Alex Buechel will be theretomorrow and possibly Jamie Snell from Ohio. So, I will be there with Star Wars related stuff, including prints, sketch cards and originals. Steve Sansweet of Lucasfilm will also be in attendance. Should make for an interesting time, so come on down and get your Star Wars fix.

The above image was swiped from their site and you can get more info here.
Posted by Bruce at 4:15 PM No comments: 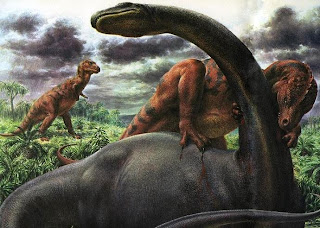 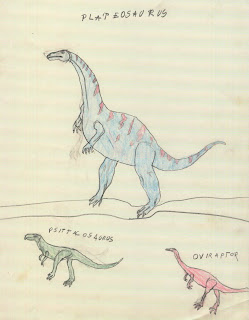 Back in September, I decided to revisit a couple of dinosaur books from my childhood. I still have them and hadn't really looked at them in years and I wanted to see just how far the field of paleontology has come in the last 50 years or so (the books being written in '59 and '60). Surprisingly, the only really obvious 'mistakes' were in bone structure, where and how the legs attached to the body. I know that they now know that it would have been impossible for some of these behemoths to even hold their own weight had their legs jutted out from the sides instead of below the body.

But, even more revealing to me, was just how much the artwork (in Dinosaurs and other Prehistoric Reptiles, 1960) by Rudolph F. Zallinger had an impact on me as a little fledgling artist. Although, structurally inaccurate, the images of the dinosaurs and the surrounding environments captivated me when I was young. The artwork is beautiful with deep, rich colors that I had never seen before (or since) and upon reviewing them, I was almost immediately thrown back to those younger days and even felt some of the excitement that I used to feel when looking at them then. Very inspiring, actually. No wonder that I hung on to them all these years! One can almost feel the heavy atmosphere and humidity in these scenes. I tried then to recreate some of those dinosaur images when I was ten and the bottom sketch is one of those. I just couldn't get those deep blues and reds, but I know I had a blast trying! I think a little bit of Mr. Zallinger artwork is still rattling around in my work to this day and why wouldn't he be?

Here is a brief snippet about R.F.Z. from wikipedia:

Rudolph Franz Zallinger (November 12, 1919 - August 1, 1995) was an American-based artist notable for his mural The Age of Reptiles (1947) at Yale's Peabody Museum of Natural History and for the popular illustration known as March of Progress (1965), one of the world's most recognizable scientific images.

Zallinger was born in Irkutsk, Siberia in 1919. He attended Yale’s School of Fine Arts on scholarships during the Great Depression, was trained as an illustrator, and he taught at Yale after graduation. The Peabody Museum hired him to paint the mural in 1943 at $40 a week, and Zallinger took a crash course in paleontology to prepare for the job. After that, the museum appointed him as the “artist in residence”, a position he held until his death[1].


I think a visit to Yale is in my future to see those murals.
Posted by Bruce at 9:03 PM 2 comments: 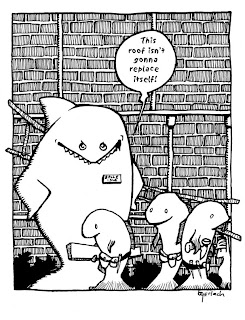 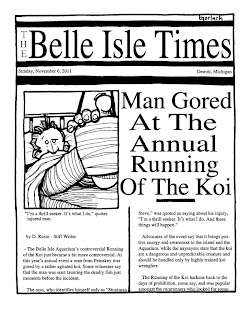 Just recently, the Belle Isle Aquarium received a federal grant to replace the roof, which is much needed, so the top cartoon was done for that wonderful news.

And the bottom toon is for tomorrow's (Sat. 11-5-11) Koi wrangling event to move the 'deadly' creatures to their winter habitat located in the basement of the aquarium. Volunteers are always welcome, so come on down to the island at 9am to help out with the move. The kids love this, especially the big ones and the more helpers we have the quicker it goes.
Posted by Bruce at 12:44 PM No comments: