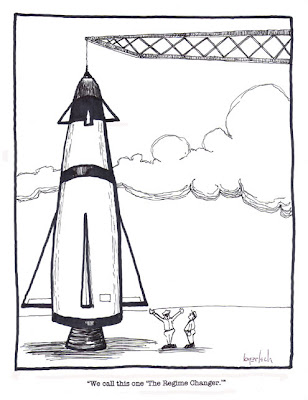 This here is my latest published cartoon. It will appear in the July/August issue of The Bulletin Of Atomic Scientists. They are the people who moniter the threats around the world that could affect our future as a species, such as nuclear and/or terrorist. They are the ones that keep the Doomsday Clock up and running. I think it's five to midnight.

I did this cartoon a few years ago and although I feel it's not one of my best ones, I'm still happy, of course, that it will be published (although it won't appear with my signature, I sent it off without signing it-duh.). This is one where the joke is better than the drawing, I think.

This was inspired by the whole Iraq/Hussein dabacle.
Posted by Bruce at 3:20 PM 8 comments: 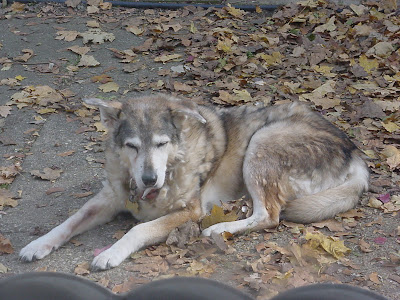 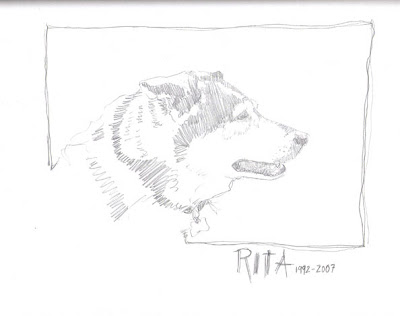 I've had the shit kicked out of me over the weekend and thought a time or two about posting about it, whether I should or not. But, I will anyways. We lost one of our dogs over the weekend. Her name was Rita ( I named her after Rita Hayworth because I was reading a biography about her at the time we got Rita as a puppy) and she was a lab/husky mix and she was 15 years old. Yes, she had a good long life (sometimes, it was hard for her), but that is never really a comfort. I won't go into details, but she suffered on her last day. That day will be burned into my mind for a long time.

Anyways, Rita was great. As any pet owner would attest to, she had a unique personality. Years ago, when we had our cat, those two were a trip. They were like Tom and Jerry, constantly messing with one another, but at the end of the day they were usually found laying next to each other.

She would love to lay in the leaves in the fall, so when I was raking I always piled them up by the gate under the lilac bush and that's where she would always plop down. The picture on top is from last fall before there was a huge pile of leaves and since this is an art related blog, I did a sketch of her from an older photo.

She was cool and she took care of us for 15 years. 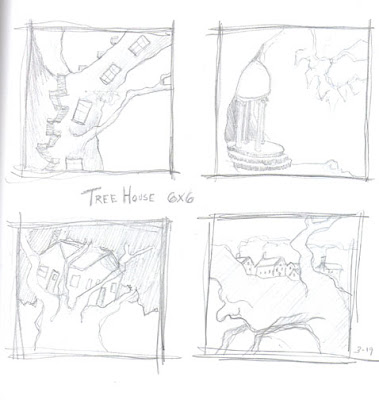 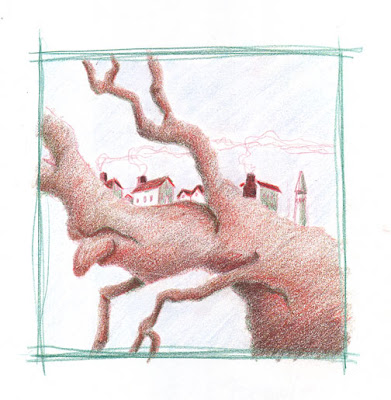 I have just been informed that I have another show this summer. All three of my treehouse paintings that I had shown in a past posting have been accepted into the Treehouse 6x6 juried show which will be held on Martha's Vineyard in West Tisbury, Massachusetts from August 5th through the 31st. As the title states, all of the works of art will measure 6x6 inches. And since I have already posted the finished product back in May, I thought that I would show the process that led me there. The top images are the initial sketches that I did and you can see that I omitted one of them. then, I did colored pencil versions to work out some of the kinks, although I didn't do one for The Arboreal Temple, which was a bit weak, I thought. But hey, they liked it anyways.

The gallery is called Treehouse Studios and the reason for this is because there is a very old oak tree right next to the building and is somewhat of a landmark. I thought that that was kind of cool. For the show they are printing up a booklet of all the artwork in the show and will be selling them at the show and the profits will benefit local affordable housing funds.
Posted by Bruce at 11:21 AM 13 comments:

Vonnegut and other things 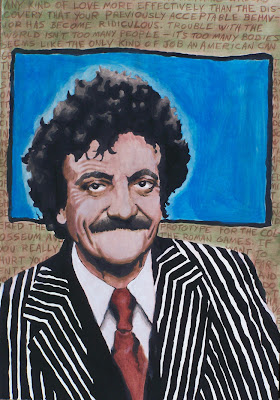 Here is the finished painting of Kurt Vonnegut. I actually finished this pretty fast and it's been done for a few weeks now, but as usual, all that pain in the ass stuff like photographing it and resizing , blah, blah, blah...
When I do a portrait and spend some time with it, the face doesn't seem recognizable to me after awhile and I still don't really see Vonnegut, but abstract shapes and lines, so I hope that someone can. I've been told that I've captured his likeness, so...

10x15
acrylic on illustration board 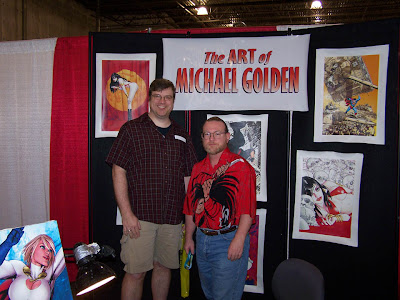 A couple of weeks ago I attended the Motor City Comicon and got to meet another one of my favorite comic book/illustrators, Michael Golden. Back in the late 70's, for me, this guy did to comics what Star Wars did for movies. He illustrated the first 10 or 12 issues of Micronauts and I have many a fond memory sitting on the front porch in the summertime with a bottle of coke and being whisked away to the micro universe.

Sometimes, when meeting someone who is admired, they turn out to be less than hoped for, but Mr. Golden didn't disappoint me at all. He's a very nice guy with a good sense of humor and it was nice to talk with him. And I spent a little time talking with his manager, as well, and she was great, too.

And he was nice enough to have a pic taken with me.

This week that I attended the show was a good one for me and some good things may come from it, but I'm not saying yet what they are because they haven't materialized yet. So, when I do know more, so shall you.
Posted by Bruce at 12:37 PM 12 comments: