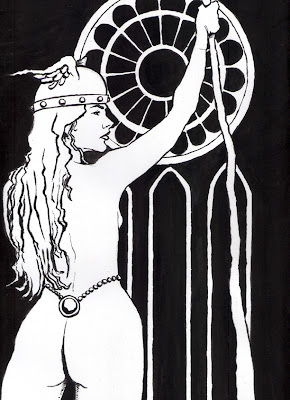 I wanted to get some practice with just doing black and white drawings, so this is one that I did last month using a brush instead of the quill. Must...do...more....


In other news, such as gallery news, I was informed by the Janice Charach Gallery in West Bloomfield, MI, that the charity event in which I painted a tie for, raised over $4,000 for charity. No idea how much mine went for because I was a bum and didn't attend the show. AND I sold my painting "It Takes A Tree To Raise A Village" through the Treehouse Studios Gallery on Martha's Vineyard. I'm sure that it went to a good home. I hope.
Posted by Bruce at 1:44 PM 5 comments: 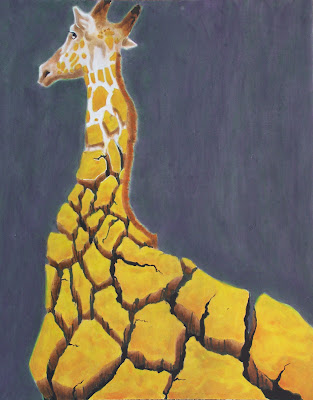 More recent work from this past summer. I'd been kicking this idea around long enough and it finally came to fruition. One of my better pieces, me thinks. 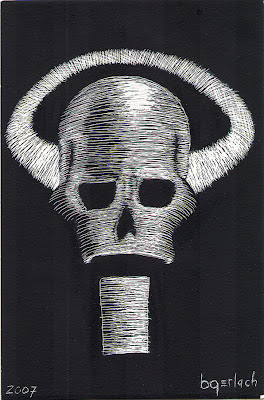 Last year I began writing a story that would eventually be turned into a comic book. Well, actually I plotted the comic out as I drew the first eight or nine pages or so and then realized that I really needed to flesh out the story and the characters a bit more. So, I shelved illustrating the comic until I could write at least a few chapters to get a better feel for the mood of the story. I posted the first six pages over at ConceptArt.org in my sketchbook thread, so some of you may know a bit about The Hat Maker story.

The main antagonist is named Mr. Solomon and at this point very early in the story his past and reasons for wanting to kill this one seemingly old man are obviously unclear. Cue mysterious music here. Anyways, he wears a hood which partially covers his face, but has this tattoo of a haloed skull on his forehead that seems to glow at times.

Here is a scratchboard drawing of said tattoo.
Posted by Bruce at 7:21 PM 2 comments: 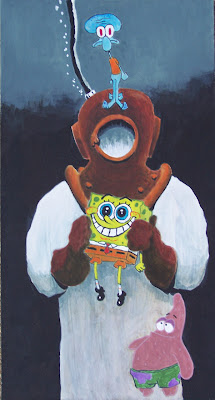 Not long before I went to San Diego for the Comic Con I was told that Nickelodean would be actively searching for illustrators and that it would be a good idea to do some illustrations using some of their liscenced material. So, this is one of the ideas that I came up with. I didn't want to just do the characters lined up in a row, in which I did for the Catscratch characters, so I incorporated the deep sea diver in the cartoony world of SpongeBob. What would his reaction be? 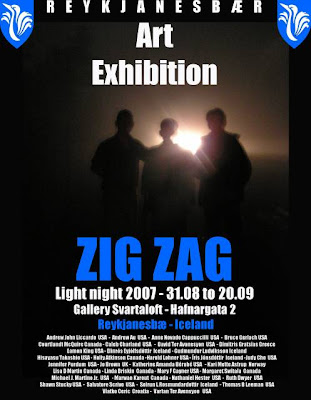 This past weekend was the opening of the Light Nights gallery show in Iceland where I have three pieces of art hanging. Their website, www.malverk.com has many photos of the event and as you can see by the photo below, no one is looking at my art, but staring out the window instead. And to think that I'm near a high traffic area such as the refreshment table... 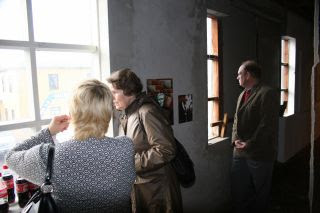 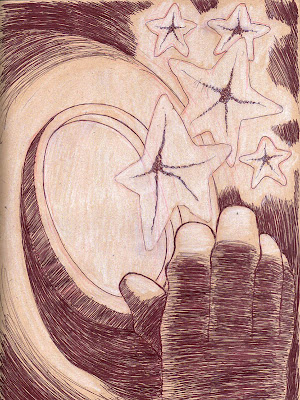 And since I like to post art and weird stuff like that, I've included one of my first sketches that eventually became the Starfish II painting.
Posted by Bruce at 12:55 PM 2 comments:

Coast to coast in one month. Last week I was on east coast spending some time in Massachusetts hitching a ride with my dad and staying with my cousin , Leah and her family. I was able to get over to Martha's Vineyard on Monday and found the gallery that I have a few paintings lingering about. 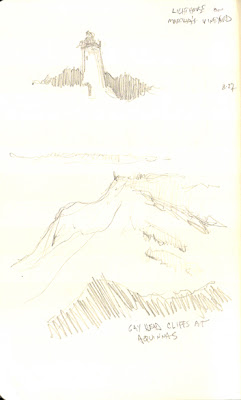 These are a couple of sketches that I did, one on the ferry ride over of a lighthouse on the Vineyard, or maybe it could have been on one of the Elizabeth Islands. I'm not sure where on the ride over that I made this. The second sketch is the cliffs near Aquinnas. 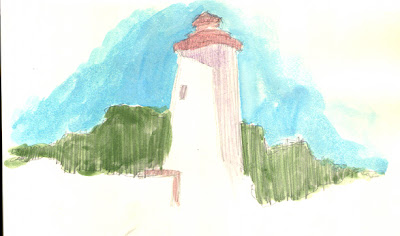 This is a very quick acrylic wash sketch that I did of the lighthouse. 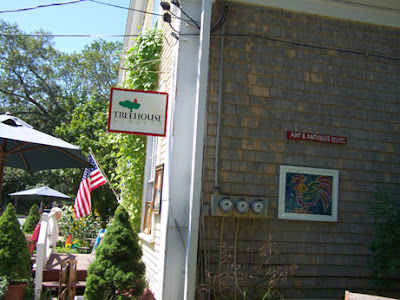 Treehouse Studios is in West Tisbury and in the month of August they held the 6x6 Treehouse exhibition. 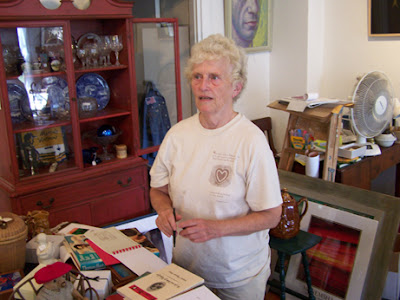 Ruth Adams is the owner of the gallery, shown here as she was about to sign one of her children's books for me. She told me about some of the island's better known artists and what they meant to the area, including Stanley Murphy and one of my favorite artists, Thomas Hart Benton, who spent some time in Chilmark. It felt good and inspiring to be near the area of one of my idols. I could probably talk to Ruth for hours and listen to her talk about painting, illustration and local history as she was very interesting and very nice. It was nice to finally get out of the Detroit area and actually see my artwork presented elsewhere and hear the feedback about my work firsthand and make those artistic connections that I rarely get the opportunity to make. 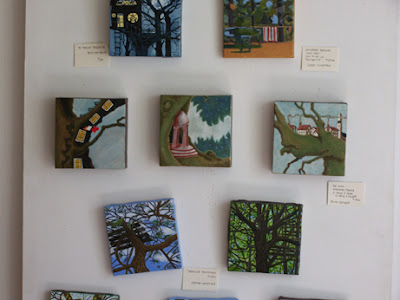 And here are the three paintings that I did for the show (the three in the center) as they hang in the gallery.
Posted by Bruce at 12:06 PM 3 comments: