I'm really getting behind with a lot of the work that I've been doing lately. Here are some of the 200 cards that I did for the Indiana Jones Masterpiece set by Topps which will be out sometime this month, I believe. other than the obvious reasons for being on this set, I was extremely happy to finally be approved by Lucasfilms because that paved the way to be on the Star Wars Galaxy 4 set. I'm about halfway through my cards and am still waiting for approval to show what I have so far. So, in the meantime, here's some Indy, which includes scenes and characters from all four Indiana Jones films. 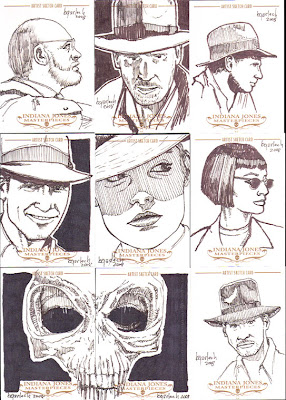 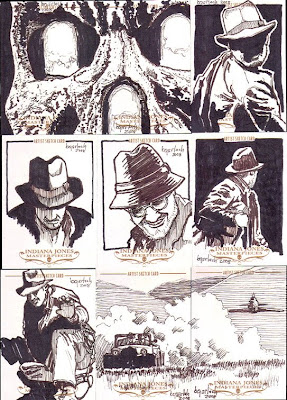 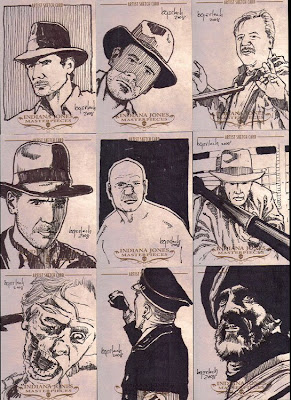 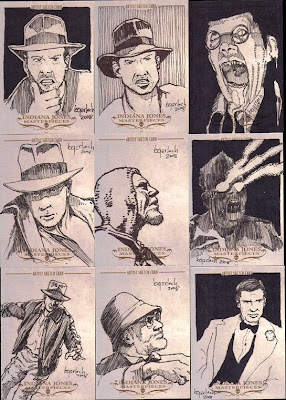 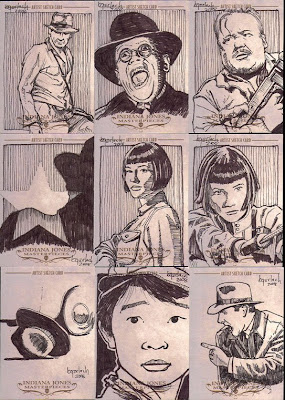 This Thursday, my friend Matt Busch will be having the premiere of his documentary film Illustration Nation, which shows his adventures trotting around the globe promoting the book How To Draw Star Wars. I'll let him tell ya:
MATT BUSCH PREMIERES "ILLUSTRATION NATION" AT MAIN ART THEATER ON NOV. 20
ROYAL OAK-- Detroit's own international artist, Matt Busch will be debuting his next independent movie, ILLUSTRATION NATION, at the Main Art Movie Theater in Royal Oak on November 20th at 7pm.
The film follows the real-life adventures of Busch around the world on a promotional tour for the New York Times best-seller You Can draw Star Wars from Lucasfilm and DK Publishing. From George Lucas's Skywalker Ranch, through the heart of Hollywood, to the streets of fantastical Tokyo, ILLUSTRATION NATION is an uncensored look at fandom and the pop culture industry that drives it. The pulse-pounding documentary also features rare cameos ranging from Anthony Daniels (Star Wars) to Gene Simmons (KISS, Family Jewels) to adult film legend Seka.
The movie covers the last two years of travels, fresh off the heels of Busch's first independent movie, Conjure, a supernatural thriller which shattered records in the indie horror scene. Since then, Busch has created over a dozen video shorts, tutorials based on the book You Can Draw Star Wars, which have also broken records with online viewing, gaining more than one million plays on MySpace alone.
Busch is mostly known for his vibrant paintings, and has been called the "Rock Star Of Illustration." Aside from all the books, magazines, and posters from a 'galaxy far, far away,' he has also worked on numerous Hollywood properties like Lord Of The Rings, Night Of The Living Dead, and Indiana Jones. Busch's work is also highly sought after in the music world, with clients ranging from Ozzy Osbourne to Foo Fighters to Jessica Simpson. Currently on his drawing desk are new designs for the 2009 line of Hard Rock Cafe T-shirts.
The ILLUSTRATION NATION premiere will be an event hosted by Busch at the Main Art in royal Oak on November 20th. Admission is $9.25. Short films and animations will screen at 7 pm. Busch will introduce the feature presentation at 7:30 pm, the running time being 1 hr 57 min. A Meet and Greet with the cast will commence after the screening in the Main Art's side lobby, followed by an after-party at Mr. B's on Main St. All are welcome. Please note that ILLUSTRATION NATION is Not rated by the MPAA, and is not suitable for children. 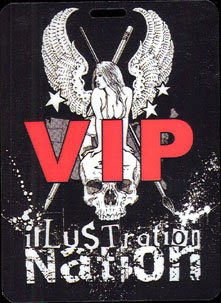 Matt was kind enough to give me  a couple of these very cool VIP passes to attend the event and below is the official postcard advertising the event. 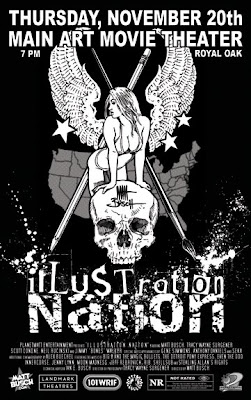 Last week's Motor City Art Expo at the Emerald Theatre was the best yet out of my three years there. Not only did I get to see some peeps that I only see at this event, but I sold two paintings , a few prints, some magnets and bookmarks. It felt good to pound back a few whiskey sours and talk art with patrons, friends, family and my fellow artists. 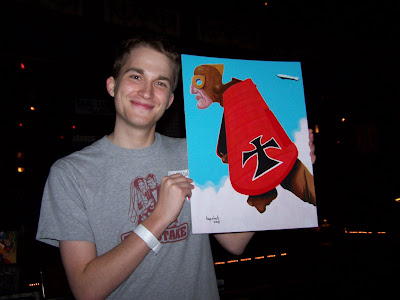 One of my wife's co-worker's David Ozias with my painting Icarus 1915, in which he purchased. 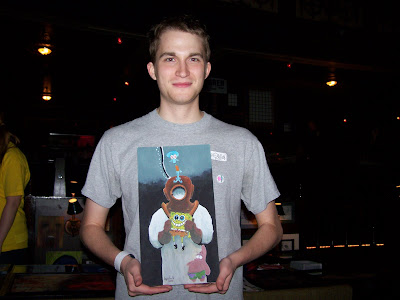 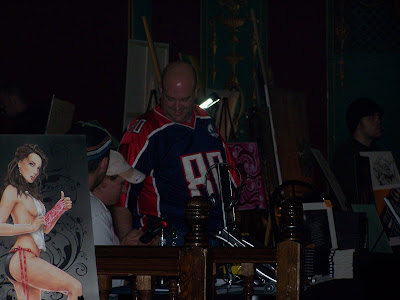 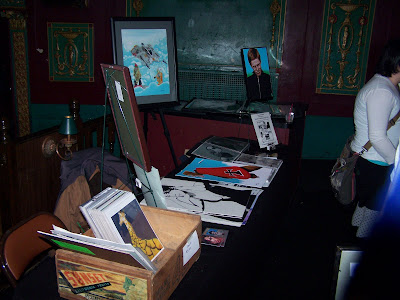 And my little corner at the Emerald Theatre.
Some of the other artists that were there promoting their own stuff included illustrator Matt Busch who besides his usual great Star Wars illos, was promoting his new movie, Illustration Nation, which documents his travels around the world in support of his artwork. I'm told I have a split second cameo (more on this later). Author Wolf Little Bear was there promoting his books and his ghost hunting investigations and Alex Buechel who is also a very good illustrator. So, check them out when you get the chance.
Once again, thanks to all the people who came out and stopped by my table, even if it was just to say hello. It was a fun night.
Posted by Bruce at 8:51 PM No comments:

I will once again be setting up residence (temporarily) at this year's Motor City Art Expo, which is not actually held in the motor city, but in Mt. Clemens, about a half hour's drive north from Detroit. This will be my third year at the expo and besides the usual paintings and drawings that I will have on display, I will also have copies of my cartoon book, prints of some of my artwork, bookmarks and magnets. I haven't seen the list of artists who will also be there, but I do know that my friends Matt Busch (illustrator) and Wolf Littlebear (writer) will have their respective talents on display. So, if you want a fun night out, come on down to the Emerald Theatre this Wednesday from 7:00pm to midnight, have a few drinks and walk around and see some cool artwork. 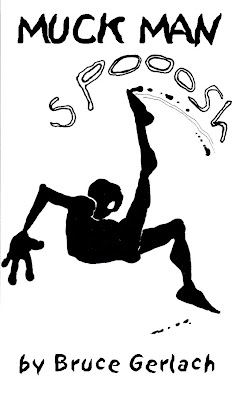 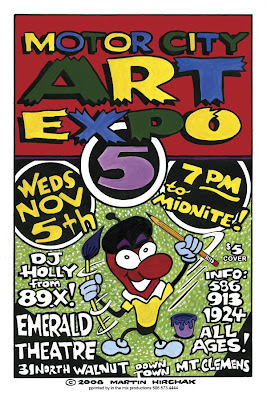