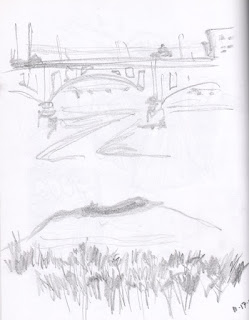 Here are a couple of very quick and loose sketches that I did after visiting the Czech and Slovak Museum in Cedar Rapids, IA. The top is looking northish up the Cedar River and the bottom one is looking southish where the river bends. I had not so fond memories of driving through Iowa as a kid and remembering how flat and boring it was, but I found eastern Iowa to be very beautiful and scenic with hills and farmland. Even in the early November chill I found plenty to look at and appreciate.
Posted by Bruce at 2:33 PM No comments: 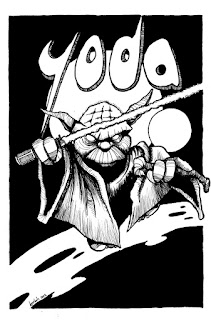 I am participating in a fundraiser for a little boy named Matthew from northern Michigan who is receiving treatment for a brain tumor, which is being put together by the Cherry Capital Con's very own Rob Humphrey. Matthew is a huge Star Wars fan, so Rob contacted a bunch of us arty types to draw up something Star Wars related that we could give to him to uplift his spirits during his struggle. And from what I have heard, Lucasfilm and the 501st are involved with the assistance of creating a book of the artwork that can be sold to raise further funds for Matthew and his family. I will definitely post further details as I receive them.

Some of the other artists on tap for this project seem to be mostly Michigan based and they include such talents as Jay Jacot, Guy Allen, Jeff Manley, Matthew Minor, among others.

Above is my contribution, an aggressive Yoda fighting the good fight. As usual, click on the image to engorge.

And keep Matthew in your thoughts while he fights the good fight.
Posted by Bruce at 2:19 PM 2 comments: 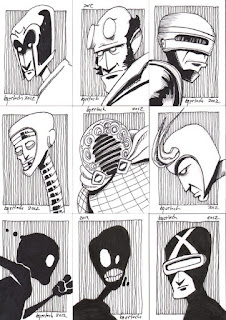 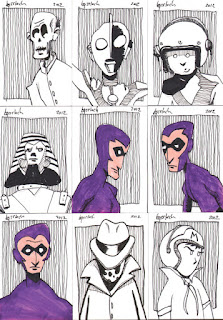 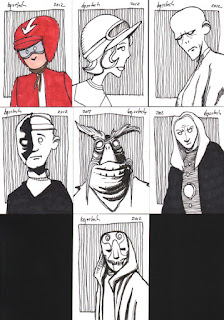 Periodically I'll do sketch cards for the Treasure Chest Foundation that raises funds for children's oncology research among other things,  I'm sure. This is the latest batch that I did for them and as you can see, they vary greatly among yesterday and today's pop culture icons. I don't know when these will be available, that depends on when they are put into the chests and purchased, I suppose.

More info can be seen here, as well.
Posted by Bruce at 1:59 PM No comments: