Race To Reopen The Aquarium 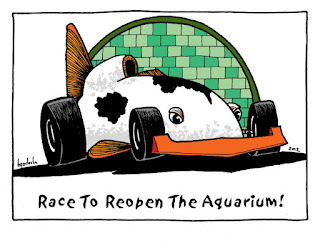 Tonight is the Belle Isle Aquarium fundraiser, Race To Reopen The Aquarium, which will start at 7 and go until 11. Tickets are $50 per person and there will be a cash bar (including the speakeasy in the basement) and local restaurants, such as The Whitney and Union Street (among others) will be providing food. Entertainment includes fire dancers, jugglers and burlesque dancers in one of the tanks. Artwork from many local artists (including yours truly) will be on display in the tanks that don't have fish in them. And speaking of fish, we have more than ten tanks filled with fish, eels, turtles and all that goodness.

This party kicks off the Grand Prix festivities, so come on down. Tickets will go on sale at 5pm. 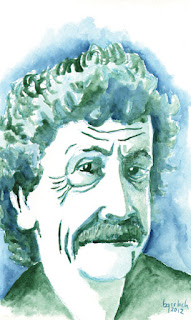 No one had his finger on the pulse of America more so than Kurt Vonnegut. The guy used wit and humor to portray the best and worst that a human being could be. His words painted the human drama in a way that was uniquely Vonnegut and there will never be another one like him, just as with most of the great original thinkers.
And he knew what it was all about. Or what it should be all about, that is. 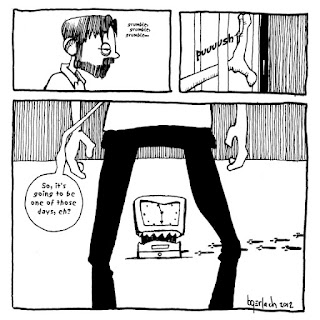 If you are going to be anywhere near Traverse City, Mi this weekend make sure that you stop in at the Cherry Capital Con at the Grand Traverse Resort and pick up your copy of the Punching The Clock cartoon book by Rob Humphrey and Jeff Manley. Rob is not only the writer for the strip, but one of the organizers for C3 (they put on a great show!) and Jeff is the super duper artist who makes all the wonderful pictures come to life. He's a bit of a nutcase, too. I was set up next to him at the MSU Comics Forum back in February and can vouch firsthand that he's a bit of a troublemaker! So, tell them I sent ya and buy a copy from these guys.

They asked a few of us artist types to submit a piece for the printed edition, so above is my meager contribution. I was glad to be a part of it.
Posted by Bruce at 4:36 PM No comments: 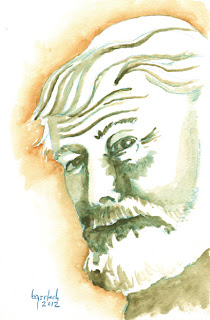 Ernest Hemingway is another one of my literary inspirations. I just love his writings. For Whom The Bell Tolls is probably my favorite book of all time. It's haunting and hopeful and tragic. For those that know me, they may think that Hemingway would not be such a draw for me being that he tells many tales of hunters and how rough and tough they think they are and those kinds of people just really turn me off, but he wrote so much deeper than that. These stories weren't so much about hunting as they were about the inner struggles of mankind. There's a hunt going on, but not one that is on the surface. At least, that is how I see it.

Hemingway mastered the art of conversation, as well. Short sentences that were long on dialogue. He was a journalist who turned his adventures on the war fronts into literary ones. He lived quite a life in wildly exciting times. One filled with travel, women, booze and maybe just a little too much bravado. I think that that had a lot with his early exit from life, but who knows?

I've tried, mostly unsuccessfully, to paint or to illustrate like Hemingway wrote. It's a lofty goal and one that I may never succeed at, but I keep trying and I keep his words always in the back of my mind rolling around with Verne and Vonnegut.

He left us with many wonderful stories
Posted by Bruce at 10:40 AM 5 comments: 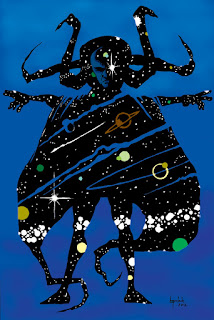 This weekend (Fri-Sun), I will be set up in artists alley at the Motor City Comic Con at the Suburban Collection Showplace in Novi, Mi, so stop on by and say hello. I will have a few new prints, including the one above, as well as my new  Muck Man comic book. Two of the cast members of The Boondock Saints (Sean Patrick Flanery and David Della Rocca) and Batgirl (Yvonne Craig) will be in the house, so make sure that you stop by my table to pick up a print to have them sign for you!

There will be  some good artists on hand, including The Minor Brothers (Matt, Jake, Kevin), Jay Shimko, Matt Busch and Lin Zy, Chris Caldwell and Mark LeMeiux, just to name a few. So, come on by and show some support!

This should be a fun weekend and I'm looking forward to seeing some familiar faces, talking shop and kicking back a few root beers.
Posted by Bruce at 6:33 PM No comments: 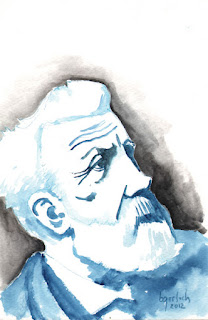 I think before any other author, Jules Verne probably jump started my imagination first. Starting with Twenty Thousand Leagues Under The Sea up through some of his more obscure works, the gears of imagination and adventure were working overtime within me. Still are and, hopefully will be for years to come. My first encounter with Verne's TTLUTS (looks dirty, don't it?) was most likely with the Disney flick starring Kirk Douglas. The only two good things in that movie were the design of the Nautilus, which might only be equalled by the one drawn by Kevin O'Neill in the League Of Extraordinary Gentleman and the second being Kirk Douglas' portrayal of Ned Land. Well, once I discovered the books I was well on my way to an imaginative and creative life.

A part of Verne's works that has always amazed me is just how accurate he was in predicting the future. Whether society took their cues from his writings, or he was just that intuitive remains up for debate, I suppose. From The Earth To The Moon (his launch site was just a few miles away from where Cape Canaveral is now) to Paris In The Twentieth Century (fax machines, monorails...) he seemed to have a way of making the future seem possible, hence The Godfather Of Science Fiction.

Jules Verne's adventures were played out in all sorts of places and with all sorts of modes of transportation, whether it was underground, in the sky, under water, or in space, using ropes, pickaxes, dirigibles, submarines, rockets and balloons. High adventure is where's it's at.
Posted by Bruce at 1:13 PM No comments: 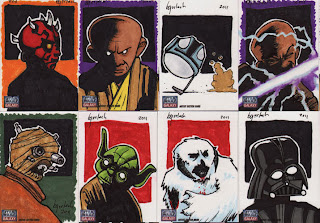 Here are my return cards for the Galaxy 7 set put out by Topps. The wampa card has already been sold, so if there's any interest in the rest of these just send me an e-mail for all the fun details.
Posted by Bruce at 1:56 PM No comments: 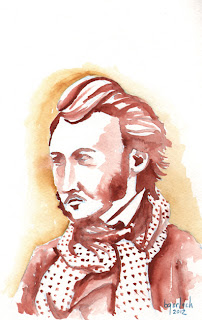 One of the best black and white illustrators ever, Gustave Dore (1832-1883) was hugely popular in his own time, his services constantly in demand. He illustrated all of the best tales of the time, including The Rime Of The Ancient Mariner, Grimm's Fairy Tales, Paradise Lost, The Adventures Of Baron Munchausen, to name but a few.

For me, as with so many others, I'm sure, it's all about that beautiful and intricate line work. I could get lost in there and have many a times. I can only imagine the amount of planning that Dore must have gone through to lay out all of the line work, thick and thin to get the most impact in depth and lighting and atmosphere. And any and all artists should study his works for his compositions, as well. Truly a master of line, form and composition and one I draw a great deal of inspiration from.
Posted by Bruce at 3:22 PM No comments:

Eternity
14x17
ink on bristol board

A just finished commission of the Marvel character, Eternity.
Posted by Bruce at 3:45 PM No comments: