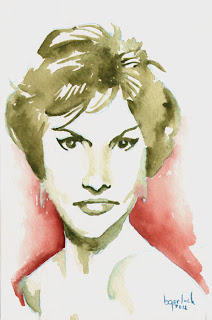 Gina Lolabrigida is one of those people that makes me question just why she is an inspiration for me. On one hand, this could be one of my most shallowest inspirations in that she is a beautiful woman and is that a good enough reason for me to be inspired? Maybe. Because on the other hand, I consider looking at a beautiful woman in almost the same way as I view a beautiful work of art and if that isn't inspiring I don't know what is. I have been known to drool a bit in seeing a wonderful sculpture and have shed a tear at others. They were that remarkable.

Now, I do consider Gina Lolabrigida to be a pretty good actor, or at least the movies that she was in were good ones. I can't say the same for one of her contemporaries, such as Brigitte Bardot. As pretty as she was, she didn't hold a candle to GL. The Movies The Law and A Very Private Affair are good examples of this. Gina's The Law was a very good movie, one that was an interesting character(s) study of life in a particular Italian small town and in Brigitte's Affair, well, not so much. They both did have the talents of one Marcello Mastroianni and one can't go wrong with him in a flick, but even he couldn't save the latter for me.

Anyway, Lolabrigida was a fire cracker, that's for sure and maybe more than just a pretty face and hourglass figure. And for that, she earns a spot in my Hall of Fame.
Posted by Bruce at 4:23 PM No comments: 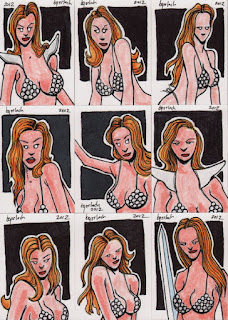 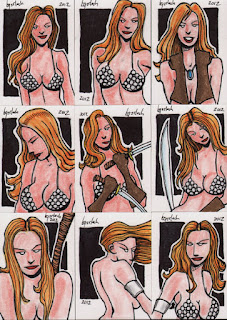 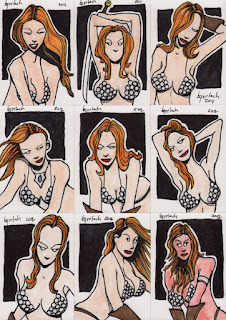 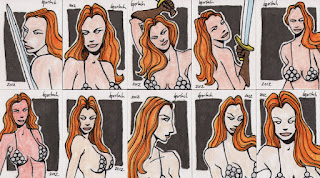 Here are some of the 70 sketch cards that I did for Breygent's Red Sonja set that will be released very soon. The last ten will be only available as a special giveaway at this year's San Diego Comic Con.
Posted by Bruce at 4:03 PM No comments: 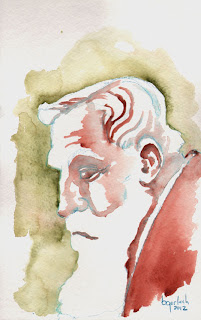 Rodin is one of my inspirations that I would not have wanted to meet, necessarily. It was definitely his work that has inspired me since I was a young man just learning about artists and art history. The way that he treated his wife Rose and his protege Camille Claudel was downright appalling at times. But then again, he did stand up to his critics and he did believe in what he was doing, even when others couldn't see his vision, so for that I will definitely give him his due.

So, what is it about his work, his sculptures that does it for me? Well, for starters there is a story in each of his busts, figures and monuments that go past just a client sitting for a portrait. There is true anguish is some figures that most artists can only dream about portraying. One doesn't necessarily have to know the details behind the story of the Burghers of Calais to get an idea of just what has transpired or what is coming, although it can only help. There is true anguish in their cowardice and true nobility in the young man who by all counts shouldn't know any better. Even in his beautiful and most times sensual and erotic depictions of women there is something beyond just a pretty face. These images, these forms are not just a lustful old man expressing a stereotype, they are of a man who sees the very nature of man and woman, at times ugly and at times serenely beautiful. Fluid is a word that comes to mind.

At one time, at least, Rodin was accused of casting from life, which was a big no no at the time, so he did not work in exact measurements after that. Instead, he made his figures monumental or smaller in scale. He could and did prove to his critics and accusers that he was a master at what he did. His hands and feet, although accurately detailed, became larger, bulky, stylized. Fantastic, is what I say. For someone like myself who has always struggled with drawing hands and feet, this was a godsend. Rodin taught me a lesson in knowing one's anatomy and then being able to break those rules a bit through exaggeration. Hands and feet became characters in their own right with their own stories of expression.

And Rodin had a biting sense of humor, as well. The story behind one of his statues of Honore Balzac is downright hilarious. I won't repeat it here, but let it be known that is is a bit vulgar.

Whatever else has been said about the man, he was passionate about sculpture. He lived and breathed clay, marble and bronze. And for that he earns a place in my Hall of Fame.
Posted by Bruce at 3:41 PM No comments: 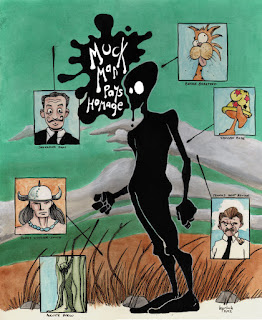 I will have three pieces in the Homage show that starts tonight at the River's Edge Gallery in Wyandotte, MI. The Homage show will be about just that, homage to the artist's that have influenced their art in some way. The above illustration will be a bit different from a lot of what will be seen, but since cartooning is a big part of what I do, I just had to do something that showed that. I used my character Muck Man to demonstrate just what goes into his world, as well as pretty much anything that I do. So, the influences from this piece are Salvador Dali, Barry Windsor-Smith, Auguste Rodin, Berke Breathed, Vaughn Bode and Thomas Hart Benton. An odd collection of inspirations, but they are there nonetheless.

The River's Edge Gallery is located at 3024 Biddle, Wyandotte, MI and the show runs through March.
Posted by Bruce at 2:09 PM No comments:

This past week I've been doing some watercolors (with my awesome Sakura watercolor travel kit) to start my day. Somewhat as a warm up, as it may be. So, I've been doing portraits of people who inspire and/or entertain me in some way, shape, or form. I'd like to keep this on more of the inspirational end, but am sure that I will stray from that from time to time. I've been thinking about doing this for some time now, kind of like my own personal Hall of Fame, I guess. This will be artists, musicians, actors, authors, etc. People who have shaped my thinking and my palette in some way for the better. I hope. 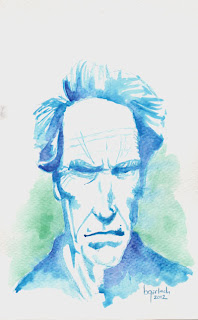 So, just how does Mr. Eastwood inspire me? Well, for starters, his movies are just way too entertaining. Not just typical testosterone guy flicks, although there's plenty of that, but something a little more. There's grit there that doesn't exist in other action movies. But beyond what's on film, I'd like to think that Clint Eastwood is a man of character. I can only go by what I read and hear, because I've never met the man, but piecing all of this together I think one can get a pretty solid idea of what this man is about. He has a character all his own, a depth that most people can only dream about. By his own words, he abhors violence, yet makes violent movies. He has politics on his mind, but is apolitical. He's a storyteller with a conscience.

I often think of the line from Unforgiven when he says to the young gunslinger, "We all got it coming to us, kid." Then I can as easily think of Clyde pushing him out of the way to get a hold of that bottle of Jack Daniels in the Any Which Way movies. I have something to think about and something to laugh my ass off about. It's all there. Punk.
Posted by Bruce at 4:12 PM No comments: 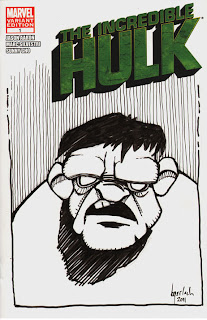 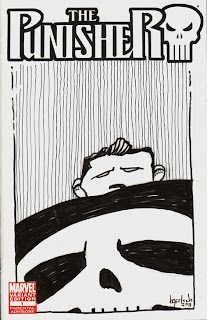 Here's a couple of sketch covers that I did last week while at the MSU Comics Forum, featuring The Hulk and The Punisher. If anyone is interested in these (I have other titles, as well), shoot me an e-mail.
Posted by Bruce at 3:42 PM No comments: 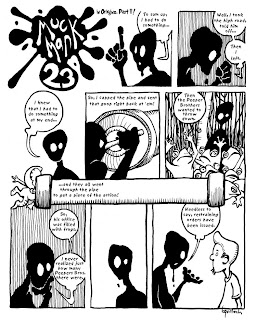 Our origin tale is winding down with one more to go. I didn't think that it would go for 12 episodes, but it kind of wrote itself there for awhile. In case you missed it a few episodes back, the Peeper Brothers are a nod to Vaughn Bode's Peeper Bros., which were twins, I believe. They appeared in his Cheech Wizard (The Yellow Hat) strips. Which were awesome, by the way.

Click on image to engorge.
Posted by Bruce at 3:19 PM No comments: 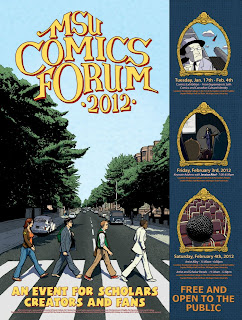 Tomorrow I will find myself in East Lansing for my first convention of the year. I will be at the MSU Comics Forum in the RCAH Phillips/Snyder Hall alongside such creatives as Jay Jacot, Ryan Claytor, Denver Brubaker and Tony Miello. So, if you are in the area, come on down and check it out. I'll have prints, cartoon books and sketch cards for your geek admiration. Click here for more info.

The poster for this year's show (see above) was designed and illustrated by Jay Jacot.
Posted by Bruce at 3:55 PM 2 comments: