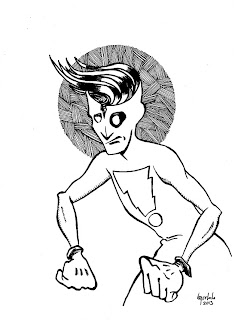 This weeks choice is my interpretation of Mike Allred's Madman, good ole' Frank Einstein. I'm kinda diggin' his big cartoon hands.
Posted by Bruce at 11:41 AM No comments: 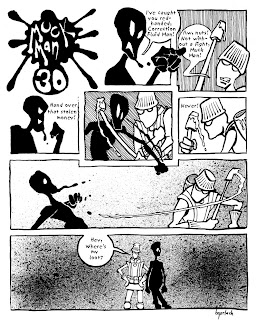 Muck Man # 30 in Covering One's Tracks! This one took a while longer to do than I would have liked, but I was experimenting in just how I wanted to do the splatter scenes. Hand crafted muck at your service.
Posted by Bruce at 5:31 PM No comments: 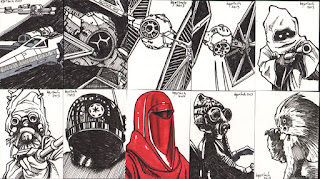 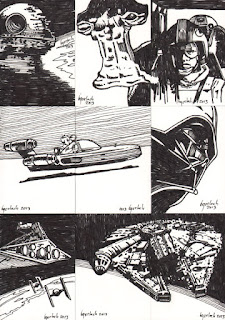 These are some sketch card commissions that I recently did and are based on cards that I did for a past official set that the client liked, but couldn't find. The two on the right side bottom of the first batch were not based on any cards that I did for said set. It was fun to tinker with what I had already done and although the client wanted them as accurate as possible to the originals, I hoped to add something more, if not better execution.
Posted by Bruce at 3:15 PM No comments: 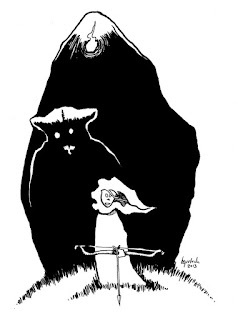 Today's Friday Ink is an image made up from the movie Brave. I like the simplicity of the composition and I think it works well here. This might even look ok with some color. What do ya think?
Posted by Bruce at 4:06 PM 2 comments: 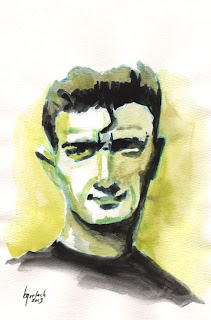 Frank Frazetta's oeuvre ranged from comics to book and album cover's to interior book illustrations to fine art (albeit considered low brow by some). He was the first artist that I was exposed to that could bring the fantasy world of barbarians and sorcerers  to life in such a vivid way that I felt a part of the action, that I was in the room, or in that jungle. His was a world of beautiful women, swordsmen, spacemen and monsters and it was awesome. Frazetta's ink work was just as unique and identifiable as his brushwork.

I chose to represent FF as he looked when a younger man. I could have as easily taken the more older version and that would have been just as fun, but I always liked the young artist that he was ready to take on the illustration world and all those years ahead of him. Plus, he has a cool Rat Pack, Sinatra, 50's tough guy look to him here.
Posted by Bruce at 6:07 PM No comments: 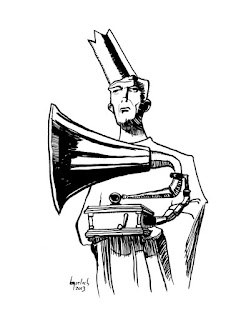 King Of America
9x12
ink on bristol board

For today's Friday Ink I have chosen to portray Lee Marvin as the King of America from the John Wayne movie Donovan's Reef. Excellent flick! If you haven't seen it, you should see one of The Duke's rare forays into comedy.
Posted by Bruce at 1:39 PM 4 comments: 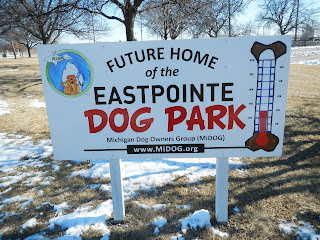 Awhile back I did the logo for the Eastpointe Dog Park group MiDog and since then they have made some strides toward opening the park. They have the site, now need the funds to put the fencing up among other necessities. On their sign you can see the logo as well as the fundraising thermometer.
Posted by Bruce at 5:47 PM No comments: