Harryhausen And The Skeletons 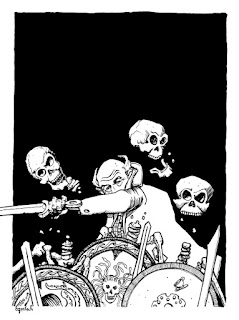 9x12
ink on vellum bristol
Happy Birthday to Ray Harryhausen! I did this drawing a couple of years ago, but had never shown it, so what better occasion that to celebrate the birth of a true artist.
Posted by Bruce at 3:35 PM No comments: 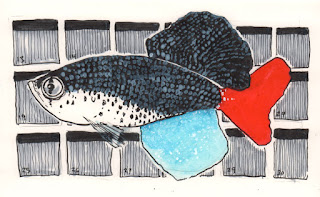 5x8
mixed media in sketchbook
This week's #SundayFishSketch theme are fish that have a short life span, so here is a red-tailed turquoise killifish, which are known to live only about a year, or so.
Posted by Bruce at 7:23 PM No comments:

W Is For Windu. 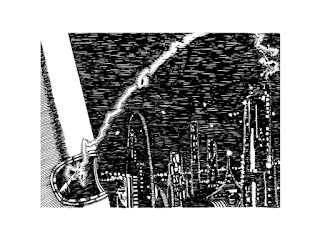 W is for Windu who
was flung out a window.
The next page from my unpublished Star Wars A-Z book, Yoda is Small and Other Such Utterances.
Posted by Bruce at 4:21 PM No comments: 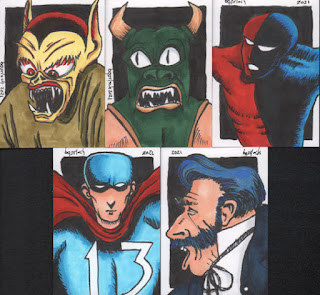 There are my Artist Proof cards for doing the Golden Age Daredevil set released last year by TB Unique. Links to the listings are below:
The Claw    Hans Meyer    Daredevil
13    Grave Digger
Posted by Bruce at 4:46 PM No comments: 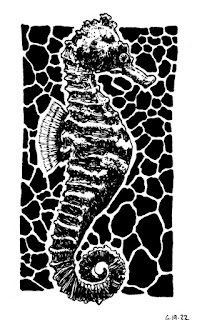 5x8
ink in sketchbook
For this week's #SundayFishSketch theme is one for Father's Day. What fish make good fathers? Well, a seahorse is such a good sport that it will not only carry the little brood to term, but help raise them, as well. And they are always fun to draw.
Posted by Bruce at 8:49 PM No comments: 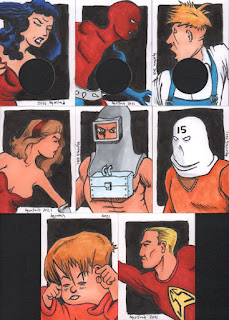 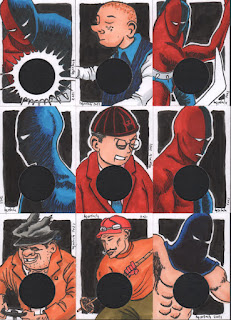 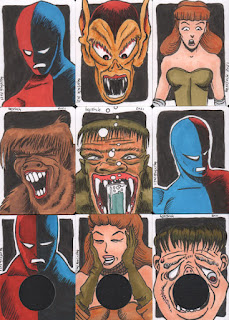 These are the sketch cards that I did for last year's Daredevil set released by TB Unique. This is the original Daredevil from the 1940's comic books. I'll show my artist proofs soon.
The cards with the holes in them had metal coins fitted in when the cards were put into the packs.
Posted by Bruce at 5:44 PM No comments: 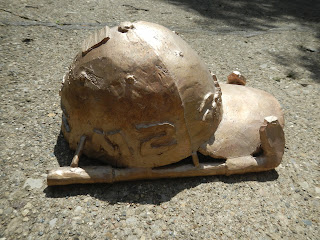 Yesterday, I was able to head on down to Blissfield and pick up the bronze casting for the golf trophy that I have been working on lately. Much thanks to Ken and the guys at Flatlanders for doing the job of making the mold and pouring the bronze! I had originally planned on doing this in pewter, since I could do that at home. As it turned out, no I could not. I would not have had a crucible large enough to hold the amount of metal needed to do the pour. And, as it turned out, I was able to go with bronze, which is what I would have wanted for this anyways, so I'm very happy to have done it this way. 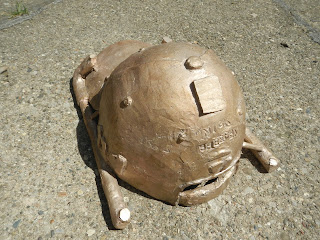 The large square was where the sprue or gate where the metal was poured into the mold and had to be cut off. You can see on the ends of the clubs where nubs are from the cut off vents. All of that has been pretty much ground and sanded down today. This is what the trophy looked like in wax form. Pardon my messy ass work station. More updates coming soon.
Posted by Bruce at 5:51 PM No comments: 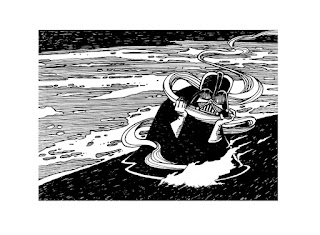 Here is the letter 'V' from my unpublished Star Wars A-Z book. A little Wizard of Oz vibe here.
V is for Vader who in
anger, hate, and fear, he sunk.
Posted by Bruce at 4:41 PM No comments: 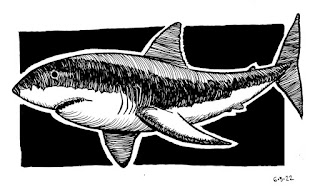 5x8
ink in sketchbook
I haven't sketch a great white for one of these #SundayFishSketch thingies, so for this week's draw any fish that you want theme, I've done just that.
Chomp, chomp!
Posted by Bruce at 3:35 PM No comments: 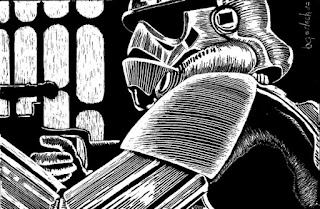 4x6
on scratchboard
I've been chipping away (literally!) at this one for awhile now, so it was nice to finish it up. Of course, nothing is ever really finished, as I could noodle this into oblivion, but you get the point. I struggle with scratchboard, but I feel the urge to keep doing it, as it provides a discipline that is different from what I usually do. I keep looking at the works of Mark Summers and recently, Thomas Ott. One has the straight lines and cross hatching that is ever so precise and the latter a more loose style, but no less detailed. Two different approaches with amazing results. Check them out, if you haven't already.
Posted by Bruce at 4:30 PM No comments: