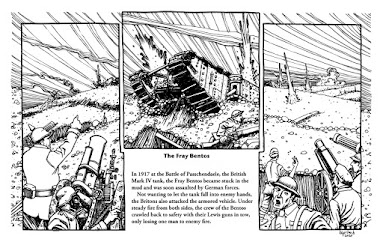 The Fray Bentos
11x17
ink on bristol
(click on image to enlarge)
During my mentorship program with The Illustration Dept. and Giuseppe Castellano we worked on images for a potential illustrated Jules Verne book and also this series. Triptych History, where I profiled lesser known, odd or interesting moments throughout history. In the five illustrations that were done, I jumped around quite a bit. Here is the first in the series. The WWI tank, the Fray Bentos.
Posted by Bruce at 5:01 PM No comments: 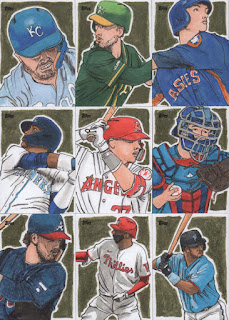 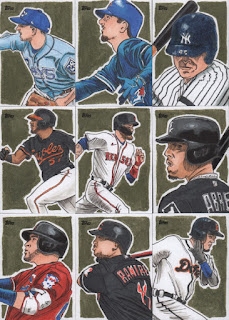 I've been seeing some of these cards up on eBay, so I'm guessing that it is safe to show these now. Last year, I participated on this set from Topps, the first sports cards that I've done since doing some NHL cards way back in 2008. And only the 2nd sports set done ever for me. I'll show the rest soon and have my AP's up, as well.
Posted by Bruce at 6:48 PM No comments: 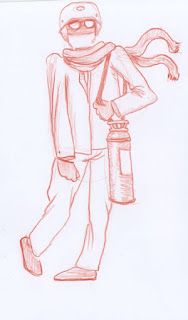 I was compelled to sketch the main character from the short animated film, Invisible. He is, of course, the Invisible Man, who not only is invisible, but weightless, as well. He holds himself down by carrying a large fire extinguisher slung over his shoulder.
The film, by Studio Ponoc, is one of three features in the 2018 film Modest Heroes. Invisible is truly a great piece of animation, worthwhile to check out if you are into such things.
Posted by Bruce at 3:36 PM No comments:

Speculations From The Evening Star 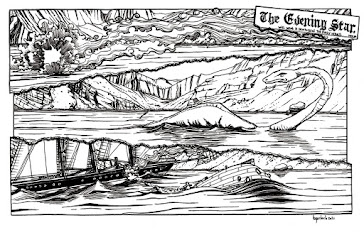 The Evening Star
11x17
ink on bristol
(click to enlarge)
This is the 5th drawing in a series based on Jules Verne's Master of the World done through the mentorship program via The Illustration Dept. and Giuseppe Castellano.
Posted by Bruce at 4:42 PM No comments: