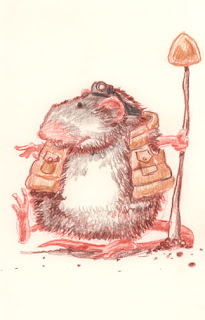 I met the new resident to my yard today. His name is 'Fingers' Philpott. I didn't ask...

He is a tour guide for meadow voles on excursions to see abandoned human structures. He moved in under the concrete slab behind our house and is getting the burrow ready for the missus and soon to be brood. Then they'll probably be on their way, so he says. He knew very little English and I new very little Volese, but we got on just fine. A chatterbox, for sure.

Creatures For A Cure Prints 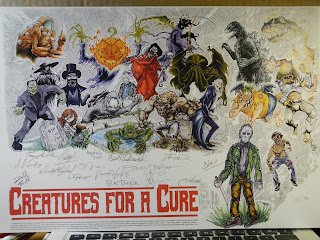 I currently have a few of the Creatures For A Cure prints available for purchase on my website. They are $15, plus shipping and they are numbered, as shown in the pic above. You can click here to purchase one.

If you'd like to purchase signed prints to support the CF Foundation for $75 you can go to Asylum Publications, Inc and proceeds will go to that charity. Please do so, if you can.

I just found out yesterday that one of my high school art teachers had passed away on the 9th. Although, Alice Allhoff was not my favorite art teacher (she was up there, though), she was an important one in my development as an artist. We butted heads often, as she was an abstract expressionist and I was into realism. I was shy, awkward, and immature, yet defiant in many ways and this came out most awkwardly in my stumbling towards improvement.

As I was looking through some of the drawings that were done in my first year of high school drawing classes (I hadn't looked at these in years), I noticed a lot of Cs. A lot of them. A lot of criticism, too. As I was reading her marks on my pages I didn't disagree with any of them. She was extremely patient with me and even if I didn't realize it then (I did at times), she taught me to look at things in different ways, take different approaches and all the things that an art teacher should be doing. She was very good at what she did, even if we didn't see eye to eye. I was lucky to have the instructors that I had in high school.

There was this one time when I arrived in class late and as I was walking in she said, "well, if it isn't Mr. Rude, Inconsiderate... and Tardy, as well." That one stuck with me for quite some time, thanks to my classmates.

Another lesson learned was when I received a C on an assignment and this girl in the class who was not even an artist and didn't want to be an artist received an A. I went into the sculpting room bitching up a storm, the injustice of it all, blah, blah, blah. The sculpting teacher, Mr. Zeibert (my fave) let me rant and rave and carry on and when I turned to him for validity, he told me I got what I deserved. See, he paid attention to all that was going on with his students and he then proceeded to tell me that said girl actually tried to do a good job, she worked hard and improved on her piece from start to finish, where I, on the other hand had just 'mailed it in,' as he said. He and Ms. Allhoff expected a better piece than what I turned in. By the time I finally picked my jar up off the floor I realized that I had been schooled (in school, no less!) and it was an immediate lesson learned.

There was an office that connected the painting class to the sculpture class and one day the drama teacher, Mr. Beard came into the office to visit and sat down at the desk as she lectured. The phone rang, so he answered it, saying loudly "Hello... Auntie Alice's Palace of Flesh." Now, Ms Allhoff was a pretty straight laced kind of person and she just slowly turned her head, grimaced a bit and Mr. Beard shrugged his shoulders and said "Maybe they'll call back?"

Below are some pieces that I picked out for the comments: 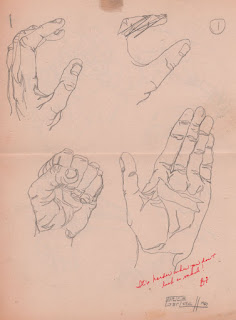 This assignment was supposed to be blind contours, but as one can plainly see, I peaked. It didn't fool Allhoff any, at all. Surprisingly, I received a B+. 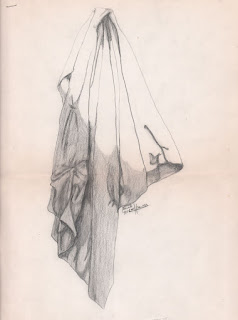 I remember doing this piece vividly. I thought it turned out rather well at the time, but she noted that I 'used too much tone.' This one received a B. 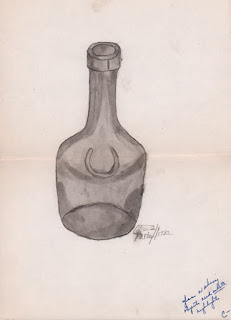 Working in ink washes on this one and as she stated 'shiny objects need highlights.' Well, duh, they sure do. A deserved C-.

I'd almost forgotten my Frank Frazetta-ish signature. I used that for years. Goofy.

So, I'm saddened by her passing, as she was instrumental in my growth as an artist. And a person, as well. 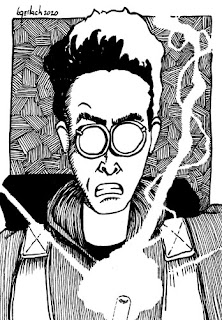 I did this here Egon Spengler for a friend who provided me with some cool retro fabric face masks. 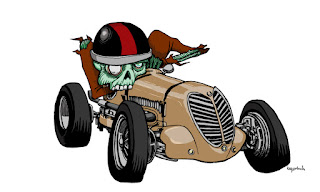 So, awhile back I started drawing up some zombie type characters driving old cars, kind of in the style of Big Daddy Roth and BK Taylor. They were definitely the inspiration. This one was the fourth one that I did, but the first that I made up into stickers. These will be up on my website soon. 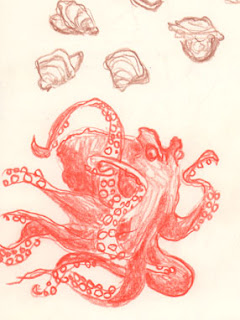 The grumpy guy is back for more, this time with some snarky oysters. 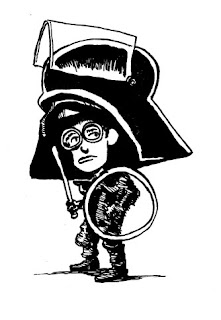 My apologies in advance to any Spaceballs fans out there (I'm one), but I just can't help but see Rick Moranis' Dark Helmet when I look at some of these riot police.

Where's Barf? He could be useful in these turbulent times. 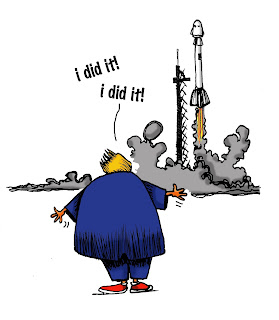 Of course the Lummox took credit for the Space X launch. Maybe, he just didn't know that this was planned about a decade ago. Then again, there's a lot that he doesn't know...

At least he wasn't hiding in a bunker when the big ship went boom.