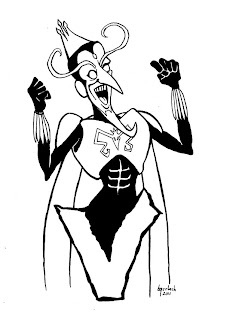 
My Galactic Files 2 sketch cards are all finished, scanned, approved and shipped back, so it's time for a brand spankin' new Friday Ink drawing. This time it's The Monarch from the bestest cartoon on television today, The Venture Brothers. Can Dr. Girlfriend be far behind? 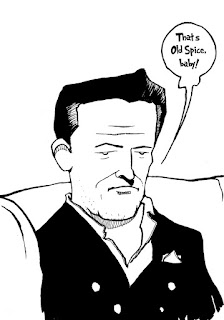 
I'm running a little behind today, so for today's Friday Ink, one from a couple of years ago featuring Bruce Campbell from the Old Spice commercial. I did this as part of a BC print featuring some of his iconic characters. It's a little bit larger than the ones I've been doing lately, but same great price.
Posted by Bruce at 4:57 PM No comments: 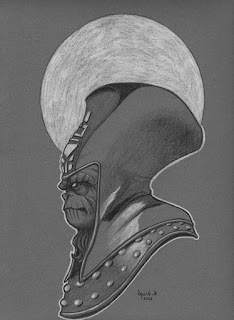 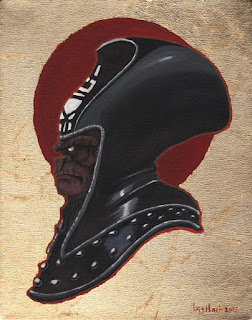 
This week is the last chance that you will have to see the In A Gallery Far Far Away show at the River's Edge Gallery in Wyandotte. So, get on down river to see all that is sci-fi and pop culture, including the Byzantine-esque General Ursus. The top image is the prelim drawing that I did before the actual painting. That one is not featured at the show.
Posted by Bruce at 4:31 PM No comments: 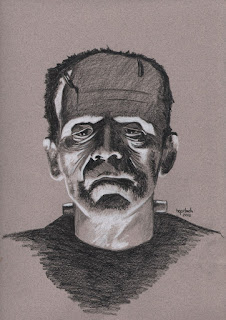 
This is old Frank done as a prelim for a painting that is now more than under way. I wanted the painting to be a little more stylized than this here drawing, but I enjoyed doing this straight up version of the Stein. Lots of shadows and light to heighten the drama that is the monster.
Posted by Bruce at 3:55 PM 2 comments: 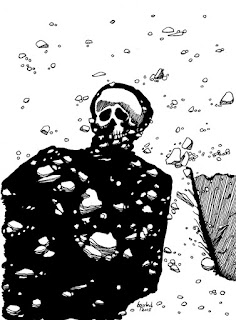 And Hamlet's shadow, of course. Today's drawing came about after I watched the 1948 version of Hamlet with Laurence Olivier. The scene where Hamlet returns from England and comes across the gravedigger and his poor friend that he knew well was such a simple, yet clever storytelling device, with his shadow creeping up on Yorick's skull. I felt compelled to draw it.
Posted by Bruce at 10:06 PM No comments: 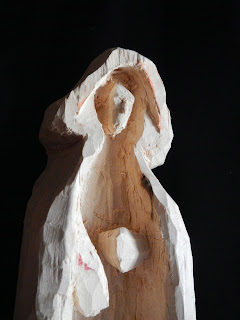 An in progress shot. 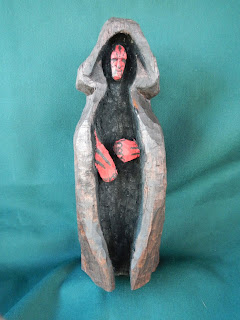 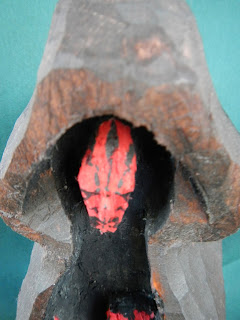 All this month up until the 23rd the In A Gallery Far Far Away show at the River's Edge Gallery is still going on. One of the six pieces that I have in the show is the one shown above, called Chasm. The character is Darth Maul from the movie The Phantom Menace and the Clone Wars animated series. I chose to depict him with an oversized cloak, filled with darkness, thus calling it Chasm. As far as I know, this piece is still available, so head on down to Wyandotte to get your Star Wars, sci-fi and pop culture fix from some artists such as Bill Pulkovski, Kelly Nemzek, Matt Busch, Lin Zy, Jay Shimko, Anne Garavaggio, Slaw, Bill Morrison and others.
Posted by Bruce at 3:00 PM No comments: 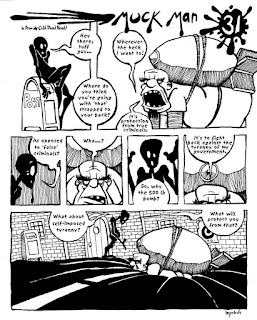 As you can see, it's time for another episode of Muck Man. For this strip I tried a different header. It gives me a little more room, but I'm still not sure of it. What do you think? Does it work better than the old one in the upper left corner?

And don't forget to listen to the Muck Man theme song by Chris Quigley. If you haven't heard it yet, you should. It's really neato. 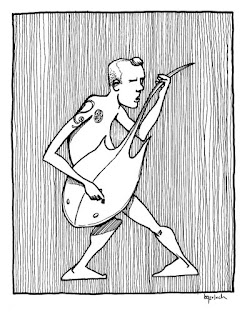 In place of a Friday Ink image today, I went with another cartoon for the Orion Music Festival, which is taking place this weekend on Belle Isle in Detroit. The Belle Isle Aquarium will be open both Saturday and Sunday, so you can drop on in and see if the fish dig the music.

I think Flea really does have a bass that looks like that. Sure he does. You can ask him yourself.
Posted by Bruce at 6:04 PM No comments: 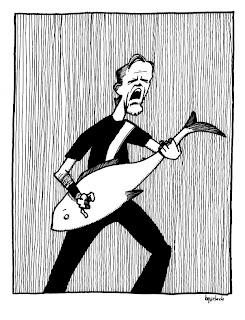 So, this weekend is the Orion Music Festival here in Detroit on Belle Isle. The aquarium will be open on both Saturday and Sunday, so when the shuttle drops you off in their parking lot stop on in and check out the fishies before heading over to the athletic field to check out the bands. You may just see James Hetfield playing the rhythm fishguitarsomethingorother. Just maybe.

It should be a good weekend for music, as such acts as Metallica, the Red Hot Chili Peppers, Deftones, Dropkick Murphys, Gogol Nordello, The Dillinger Escape Plan and many more will be doing their thang on the island.
Posted by Bruce at 10:53 PM No comments: