Here is a pin up style painting that I finished up a few months ago. It has two subjects of interest for me; women and bumblebees. What does this mean? I don't know. Does this really need a meaning? You tell me. 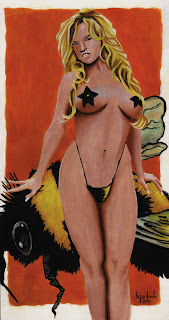 Bumblebee
15x8
acrylic on illustration board
Posted by Bruce at 7:53 PM 2 comments: 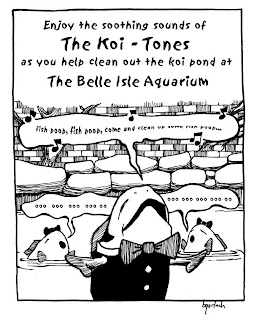 This Saturday, starting at 9:00am volunteers will be cleaning out the koi pond at the Belle Isle Aquarium and can use all the help that can be offered. Believe me, I've seen the horror that is fish poop on a large scale. All puns intended. Besides all the smelly stuff, it is a fun time and a good cause, so if you are hankerin' for some volunteer grunt work, come on down to Belle Isle and lend a fin. In two weeks (May 7th), will be the koi transfer.
Posted by Bruce at 4:11 PM No comments: 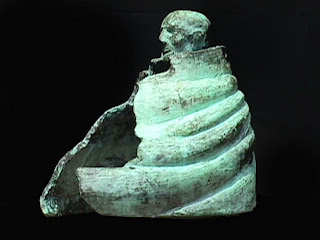 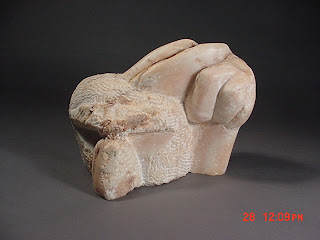 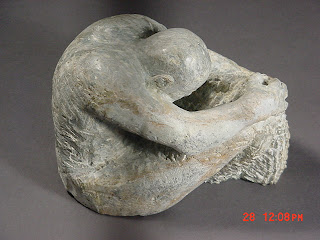 Emergence, soapstone
Once upon a time when I was in my twenties I tried my hand at the gallery scene with some limited success. And here and there throughout the following years I have had my paintings, drawings, cartoons and sculptures in group shows here and abroad. But, until now, have had no real gallery representation. Yesterday, the River's Edge Gallery in Wyandotte, MI took on three of my sculptures to promote and possibly put into the hands of a collector of such art. And all of this comes with the intention of me producing more work, especially in the line of the stone carvings.

So, my thanks go out to Jeremy Hansen, the gallery director and Patt Slack, the owner for having faith in my work. I'm excited at this new possibility.

You can contact the gallery itself for all of your Gerlachian sculpture needs. 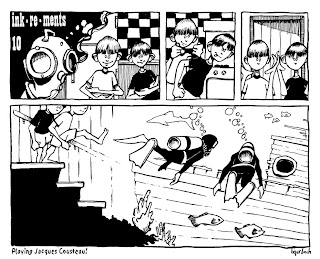 If you think that my imagination as an adult is wild, you should have seen me as a kid. Looking back I sometimes think that I was off the charts some. In a good way. Those of you raised on video games might not get this latest incursion of my auto-biographical ink.re.ments strip, but for those that had boxes that transmogrified into forts and spaceships and battleships, then you know where I'm coming from.

One of my childhood friends had this basement that was divided into two rooms right down the middle. The one side was finished and looked to me like the interior of some old ship and the other side, where the laundry room and workbench were looked like the darker levels of a sunken ship. My friend's kitchen was the launching area where we would don out scuba gear, then proceed to the "back of the boat," where we would jump off and into the sea to make out descent into the depths to the interior of that sunken ship. I don't know about my buddy, but when I went down those steps I was there. I could feel the water, see the bubbles leaving my ventilator, see those fish and the sharks off in the hazy distance and feel the danger lurking as we entered that 'ship.' It was awesome. We visited that wreck often. 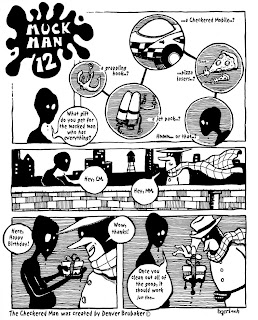