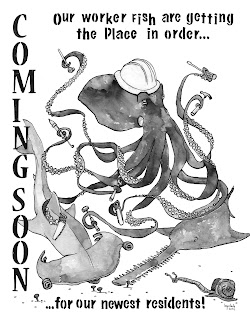 Recently, the Belle Isle Aquarium in Detroit asked me to come up with a sign to let visitors know that a variety of tanks in the alcove that are under construction will soon have new residents. This was a challenge with a broken wrist, but I was determined, so I laid the composition out with my left hand and as each day went by I was able to do more and more with my right hand and it became easier, as well. A fun side project, for sure.
Posted by Bruce at 3:38 PM No comments: 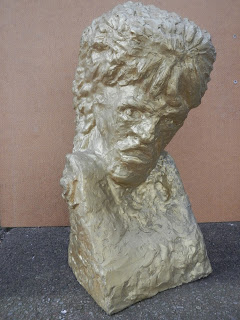 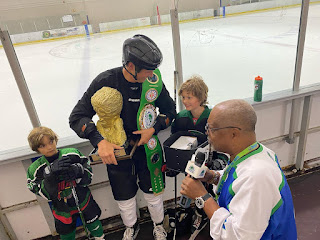 Trophy presentation
(photo courtesy of Frozen Fish Fiasco/Dom Riggio)
The Frozen Fish Fiasco Tournament to benefit Clark Park in Detroit, usually held in January, was held over the weekend. As with so many things Covid, the event couldn't be played until now.
So, last December I cast the annual trophy, this time in a gold finish and it was presented to the young lad above for the best hockey hair. A fun trophy and a fun event.
Posted by Bruce at 6:02 PM No comments:

8x5
ink in sketchbook
For this week's #SundayFishSketch the theme is lost fishes, meaning fish that haven't been seen in a long time, but are not considered extinct. At least not yet. I have chosen to represent the Syr Darya Shovelnose Sturgeon endemic to the Syr Darya River in Tajikistan and Uzbekistan, which were last seen in the 1960's. Part of the Area Sea has dried up over the decades and that has had an impact on this fish population. Add that to pollution and the population of this sturgeon has dropped significantly.
I will be contributing some artwork to the Shoal Conservation's Lost Fish Art Challenge and I plan on doing this fish, as well as a few others, probably in watercolor.
Posted by Bruce at 9:27 PM No comments: 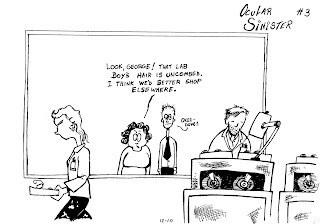 So, this week I finally went to get a new pair of glasses, since I smacked my face off of the pavement and my eyewear took a hit. I went to a place that I used to work at many years ago and while I was there learned that a coworker had passed away a few years ago. As I often did at places of employment  cartoons were done reflecting on workplace shenanigans and the characters that worked there. This is one that I did about the somewhat stupid policies in effect because customers could see us. I put John, the worker that I mentioned, on the left hand side carrying the tray. He was fun to work with.
Posted by Bruce at 4:11 PM No comments: 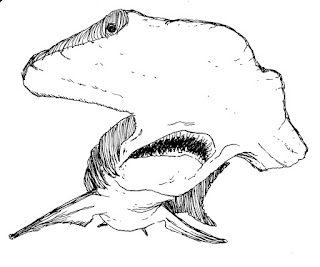 Hammerhead
6.5x5
ink in sketchbook
This week's theme for #SundayFishSketch are busy fish; nest builders, migrators, etc. Hammerhead sharks migrate, so that's my choice of the day.
Posted by Bruce at 8:15 PM No comments:

The Belle Isle Aquarium Is Open! 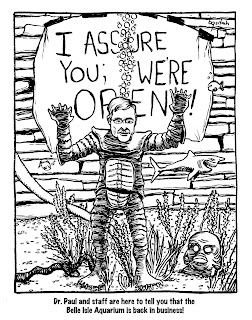 The Belle Isle Aquarium in Detroit has officially reopened as of today. All Covid restrictions have been lifted and will return to the Before Times schedule of Friday through Sunday.
Dr. Paul Shuert and staff have been holding down the fort during lockdown and taking good care of all the residents, including many new ones. He has also helped guide the tankscapers in their work to spruce up the old tanks and create some new ones.
This cartoon sprang from a conversation with an aquarium alum about how the aquarium needs a tank with one of those cheesy Creature from the Black Lagoon thingies from home fish tanks. And a couple other film nods in there, as well.
Posted by Bruce at 3:12 PM No comments: 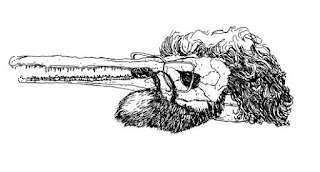 8x5
ink on paper (sketchbook)
So, bear with me once again for what I am presenting. On a few counts. First, I am not going with the flow, so to speak, with this week's theme for #SundayFishSketch. The theme was to represent a fish that was named after someone famous. Originally, I was going to do a black spot barb from the group Dawkinsia named after the evolutionary biologist Richard Dawkins. But corniness, or whatever you want to call it won out. So, instead did up someone with a fishy name.
I'm using these Sunday fish challenges to gauge just what I can and cannot do with a broken wrist. I penciled this out with my left hand and inked, in stages, with my splinted up right hand. Progress is slow, but it's there.
Posted by Bruce at 6:22 PM No comments: 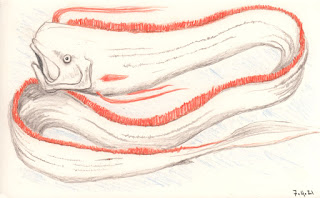 colored pencil
5x8 sketchbook page
Bear with me on this one. I broke my wrist this past Monday and have been slowly experimenting with what I can and can't do at this stage. This sketch took me most of the afternoon with plenty of breaks (pun unavoidable) and alternating between my right and left hands. Not bad, I guess.
So, for today's Sunday Fish Sketch theme, it was for the longest fish. I selected the ever awesome looking oarfish. They can be as long as 26 feet, or so.
Posted by Bruce at 6:14 PM No comments: