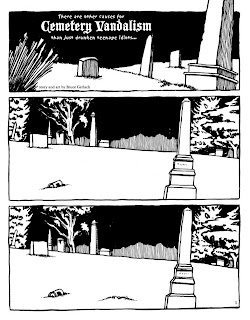 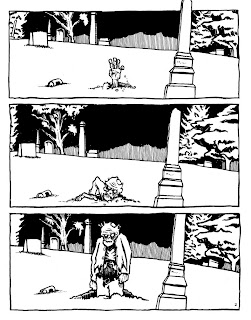 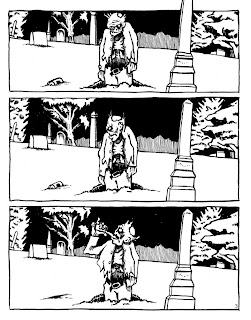 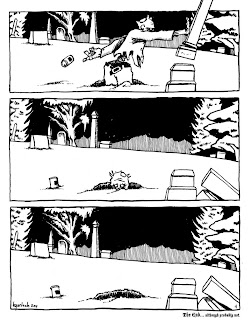 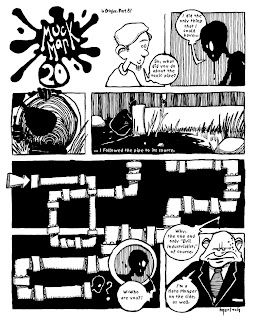 The origin of Muck Man continues! Click on image to engorge.
Posted by Bruce at 11:45 PM 2 comments:

Recently, I finished up a logo design for TJS Automotive Repair shop located in Madison Heights, MI and here is the final design as it will appear on their t-shirts and other advertisments. The car used for this design is based on one of the owners own cars, a 1968 Grand Prix. I had a lot of fun doing this one and I seem to be getting better at doing cars, as long as I can put my own twist in there somewhere.
Posted by Bruce at 3:49 PM No comments: 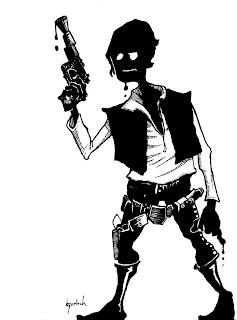 My Chicago based uber talented musician buddy Chris Quigley has honored me by writing and recording a theme song for my Muck Man character. When he approached me a few months back about doing something like this I thought that I would keep an open mind and be gracious for whatever he came up with. I didn't think that this would be too difficult a task to accomplish since I'm a fan of his music anyways. But, when he sent the link with the demo, I have to admit that just before playing it I had a secondary flash of anxiety that it wouldn't capture the 'essence' that is the Man of Muck. I then reminded myself that I would probably like what I heard. All doubts (which were pretty much nil, anyways) were immediately cast aside when the first guitar licks festooned from my speakers. To say that I was pleasantly pleased would have been an understatement. It does have an infectious guitar riff that I seem to be humming all weekend. Come on! Muck Man has a theme song! How cool is that?

Chris and I go way back to high school and as he has said that I liked him even when his music sucked, I can say the same that he stuck around me even when my art sucked! I fondly remember him giving me flack about my dreamy big-eyed self-portraits. Good times. So, go and check out his site for witty remarks and even better tunes. I believe that he is currently tearing up the Chicago night club scene, so if you live in the Chicago area, check him out!

And here is the instrumental version.

So, make sure that you go to the Quigman's site and tell him just how cool the Muck Man Theme is! I command you.

And for your veiwing pleasure, a toon of Muck Solo, as seen above.
Posted by Bruce at 8:03 PM 3 comments: