This fellow here was also based on an actual employee at the mattress factory that my co-creator Darin Palmer and I worked at. I honestly thought that we used his real name, but didn't. Melvin is so much better of a name for this guy. The real guy didn't have flies around him, but if I recall correctly, he did have a unique odor. Nothing truly offensive, just all his. When the rest of us saw garbage, he saw nothing but sunshine. Infuriating.

These there are my artist proof cards for doing the ESB B/W card set for Topps. The links are below:

The Empire Strikes Back Black And White Sketch Cards 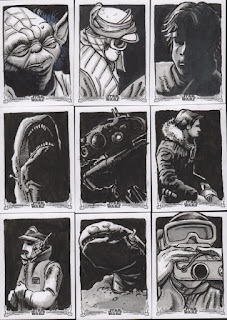 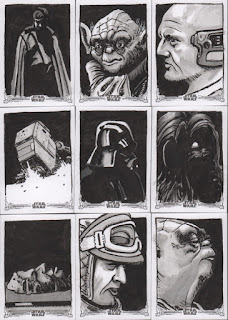 These here cards above are about half of the ones that I did for The Empire Strikes Back Black/White set released by Topps today. I'll post more and my AP's soon.

Here we have strip #2 of the Pipedreams comic that my friend and fellow artist Darin Palmer created way back when.

The introductions continue and we now have Chester, who is also psyching himself up for the daily grind. Chester was loosely based on myself and I want to say the name came from that line in that song by The Band, 'hey, wait a minute, Chester....' You know the one. As I remember, we liked singing just that particular line, for some reason. Thus, Chester was born.

So. Way back in the mid 90's, I was working in a hell hole mattress making factory alongside friend and fellow artist Darin Palmer. We tried to ease our pain by making fun of it. And so, we created this strip called Pipedreams, our endless pursuit of being stuck and striving for better things. We had so much fun doing this and I think that we only sent submissions out a few times, with no luck. So, it was shelved. i revisit it from time to time and I still laugh at what we came up with.

Most of the characters, if not all of them are based on our actual fellow workers and bosses and a lot of what happened, actually happened. We embellished just a touch. I thought it would be fun to show these strips and add some useless trivia, to boot.

This first strip is an introduction of one of the two main characters. Of course, we based them on ourselves. Who better to tell the pain than the ones living it, right? So, this here is Chili Palmer, based on Darin. I believe that Get Shorty was released at about this time and thought it funny that Darin and Travolta's character had the same last name. Hence, Chili.

We wrote the stories together, I penciled them and Darin inked and colored them.

This past Saturday I was at Rainy Day Art Supplies for their Go Figure! live model sketch night. It's usually a good time and this one was packed! It was good to see so many artists there having a good time and sketching for a couple of hours. As always, our host Kelly O'Hara made us behave (somewhat. I think she likes a dose of chaos) and we had another fine model in Megan Morse. 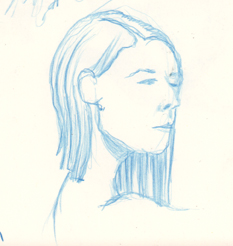 That night was working well for me (hence, more scans!) The blue colored pencil was flowing well. 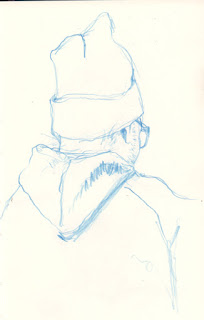 This guy... No, just kidding, he was just fine, but with it being so packed with sardine artists he was planted on a pew somewhat in front of me. He seemed cool. Brian, I believe his name was. 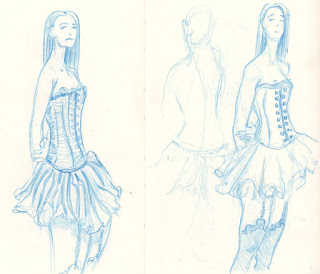 Really exaggerated the legs on the left hand sketch. I'd like to say that it was intentional, because I think it came out well, but let's just chalk this one up to being a happy accident. 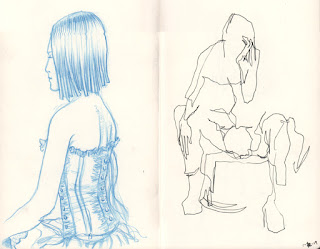 Very happy with the one on the left. The right hand sketch is a blind contour drawing. I love doing them. 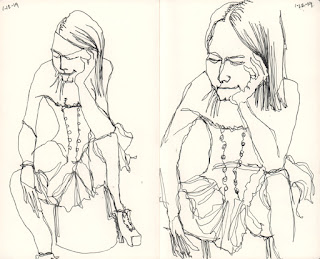 These two are not so blind contour drawings. 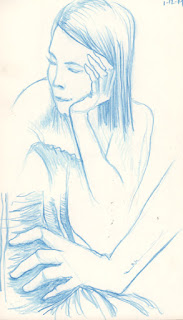 I don't draw hands well at all. Happy with this one.

So, as I said, these sketch nights are very fun and worthwhile, for sure. Among the fine Detroit area artists present were Jay Fosgitt, Darin Palmer, Jim Anderson, Jeff Sornig, John Wood, Kevin Minor, John Martin, Anne Garvaglia, Jay Shimko and Terrell Culbert. Check out their art! Hopefully, I'll get to know some of the other regulars, as they are very good artists, as well. And they are patient with the rest of us.

These four cards are my Artist Proof's for doing the set. The links are below, if anyone is interested: 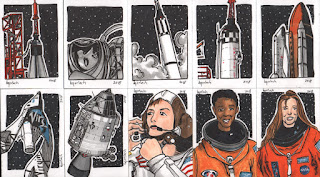 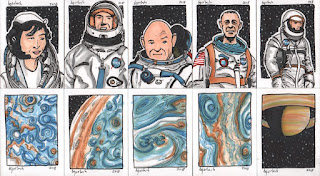 Here is my contribution to the Space 2 card set put out by Viceroy Cards last month. They usually have interesting subject matter to work with and this one was a lot of fun to do. And these were done on thicker than usual card stock, very high quality for the discerning collector.