A Night At The Aquarium On Belle Isle

Last Saturday night was the Night At The Aquarium fundraiser event held at Belle Isle's Aquarium and by all indicators it was a successful night. There were over 200 people that showed up to support the efforts of FOBIA to re-open the aquarium. The aquarium tanks themselves were filled with all sorts of items, fish related or otherwise, for the silent auction and most everything went home with someone. 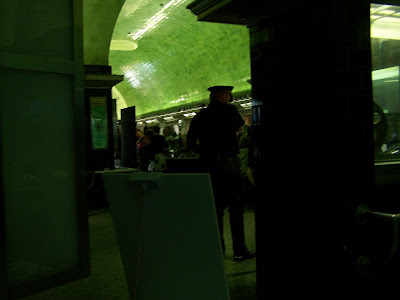 The above pic is a view from my table where I was doing aquarium and fish related cartoons. The cop was from the mounted division (check out the spurs) and he popped in from time to time and seemed to enjoy the festivities. I wonder where he tied up his horse? 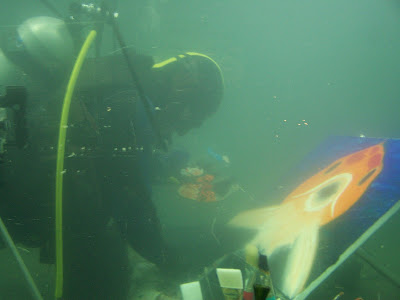 One of the tanks was filled with up so that Port Huron artist Gregory Lashbrook could paint under water. He and his wife are under water documentary film makers and they also had a lot of cool artwork on hand. 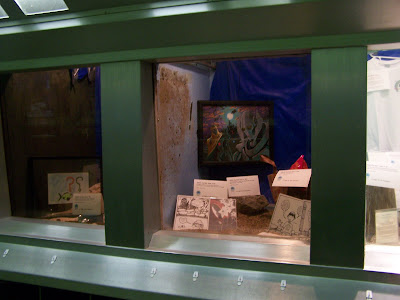 The tank to the left was filled with three of my original "fish" cartoons that were in a cartoon festival in Iran in 2005. The tank on the right had a General Grievous painting donated by my pal Matt Busch and there were also some of my aquarium cartoon prints in there, as well. All went to some lucky bidders. 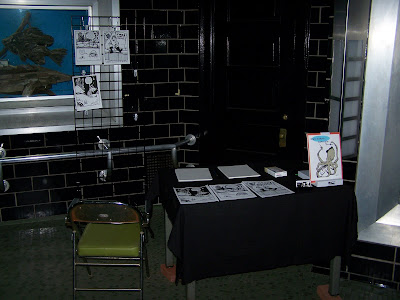 This was my little set up right across from the center pagoda. You know, right by where the food and alcohol was being served. I spent the evening drawing cartoons to the amusement of the masses (I hope). Actually, I was a little concerned how this would go over, but it seemed that most people got it and had fun with it. I know that I enjoyed myself talking with people about the cartoons and such. People took prints and two originals were taken for a donation to the aquarium.
There were guest speakers there for the people to talk to, such as past curators and other specialists, and I was asked to make up some place cards for each guest. Here are most of the ones that were done. They disappeared quickly, so I hope that someone like them and took them home. 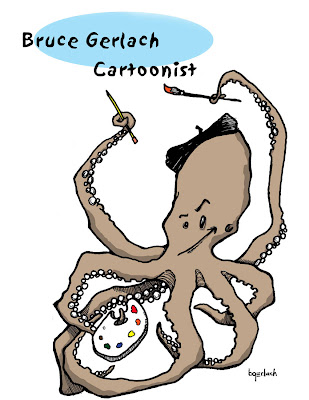 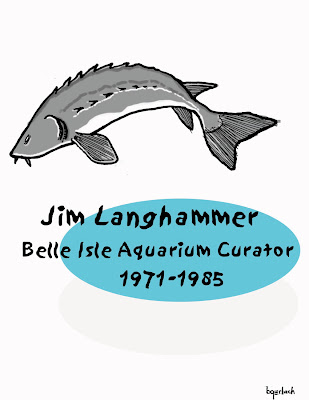 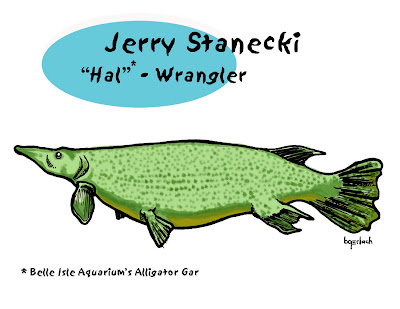 Jerry Stanecki was a local newscaster who had went down south to fish for a new alligator gar after the old one had died. They named him Hal. 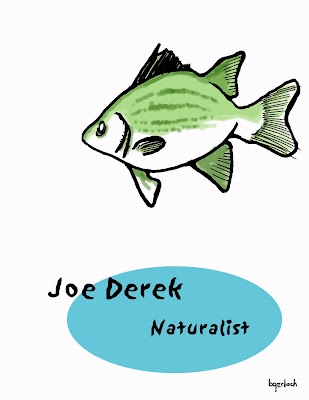 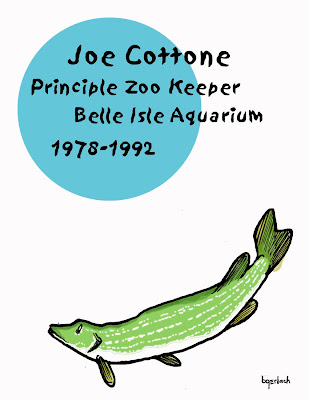 So, all in all, a great night that I was happy and honored to be a part of. I really like being in this old building and getting the chance to walk around behind the scenes and just taking it all in (I've been able to do this a few times these past few months). And I've met a lot of good people who are also a part of this whole thing.
Who would have thought way back in 1977 when I was coming here for grade school field trips that I would be sitting in the center of the aquarium drawing cartoons for the fish.
Posted by Bruce at 4:46 PM 2 comments:

It seems like it's been forever since I last had a post here. I must say that it's been a long two weeks spending some time in the hospital trying my best to pass a kidney stone. After cat scans, x-rays and all that good stuff, it turns out that I have three stones in various places en route out of my body (I hope). Obviously, not much else has been on my mind, hence the inconsistency in posting.
I had planned on posting a review of the Mid Summers Expo, but in truth there wasn't much to report. Hardly anyone showed up and there were more dealers and artists there than attendees. But, it was fun to talk with the other creators and see what everyone is up to. I think everyone still had a good time. 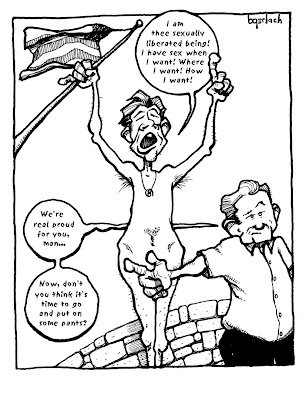 Above is my latest cartoon for Debaucheri Magazine's July/August Issue. The theme was sexual liberation and freedom and all that good stuff and when doing this toon I couldn't help but recall when my friend Rob was telling me about how laid back the people in Amsterdam are. His example was that if some guy decided to take all of his clothes off and go and sit in the middle of the city no one would really pay him that much attention. They would probably steer clear, but it wouldn't be that big of a deal. then after awhile a policeman might come by and say something like "ok, you had your fun, now don't you think that it's time to put on some pants?"
And of course, there's the strategically placed digits...
Posted by Bruce at 2:08 PM No comments: 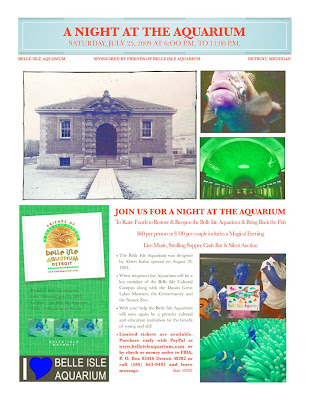 I have some changes to report about the Night At The Aquarium event scheduled for the 25th of this month. The Friends Of Belle Isle Aquarium have lowered the price to $60 per person and $100 per couple. Also, Port Huron artist Gregory Lashbrook will be painting live under water in one of the tanks, so that should be quite entertaining. And to add to the evening's shenanigan's, I will be on hand doing aquarium related cartoons. Yikes. 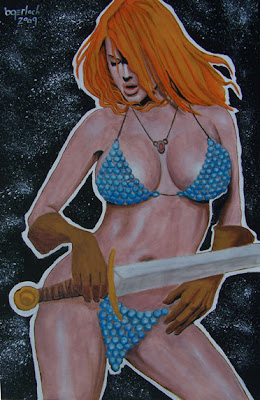 Red Sonja
10x15
acrylic on board
And on the convention front, I will be one of the many guests at the Mid Summers Expo tomorrow, July 11th in downtown Detroit at the Detroit Civiv Center. I know practically nothing about this show, so you may know more than me. It's a sci-fi, horror, comics type show not unlike the Motor City Comic Con, but on a smaller scale. One of the guests will be Tom Sullivan, who was the special effects guy and designer of things scary for the Evil Dead movies. I met Tom at the MCCC back in May and he is a really cool guy and has some interesting stories.
So, if any of you two people who frequent this blog are in the area, stop on by and say hello. I'll have the usual: magnets, book markers, prints, cartoon books and original artwork.
Posted by Bruce at 2:37 PM No comments:

A Night At The Aquarium 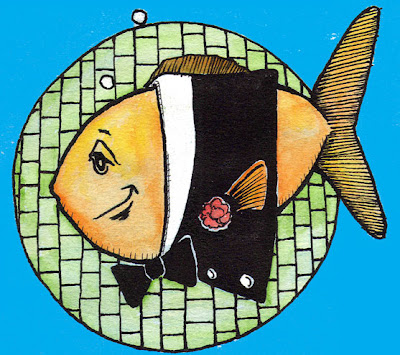 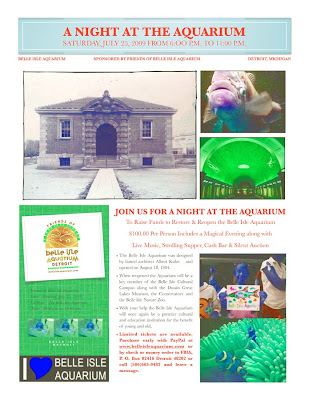 On July 25th, The Friends Of Belle Isle Aquarium will be hosting a dinner fundraiser at the aquarium itself located on Belle Isle on the Detroit River. All the necessary information is on the flyer provided by FOBIA and this will definitely go a long way in helping to reopen the historic and cultural establishment. And keep in mind, if the price is too steep or you just can't make it down on that night, you can always visit the website and make a donation of any size.
Posted by Bruce at 11:16 PM No comments: