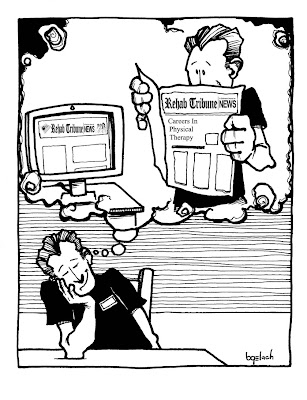 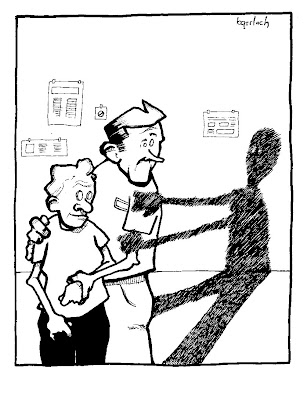 These are the cartoons for the April and May issues that I did for Seattle's Rehab Tribune magazine. The first was done as an introduction for the print version of the mag and the second is about the cuts to funding that will not allow physical therapists to treat two patients together. I'm not sure on all the details of that, but you can read that here if you so please.
Posted by Bruce at 1:17 PM No comments:

Last weekend was my first ever appearance as a guest artist at the Motor City comic Con. My buddie Matt has been urging me to do this for the past three cons, but I never felt quite ready. But, as I have learned, I will never be ready. For anything! So, this was my year to jump in and enjoy. Another of my friends, Darin, was my guest and helper for the weekend and we had been talking about doing the show for years, like, way back in the early nineties, or something. So, it was nice that we finally got to experience it. 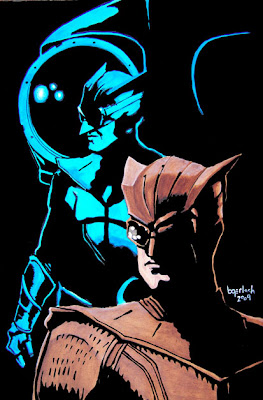 This was one of the pieces that I had just finished prior to the show.
Night Owl
15x20
acrylic on illustration board 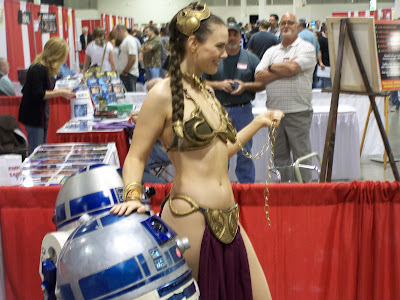 This was my view for most of the day on Saturday. Like the guy next to me said, "chicks dig R2." 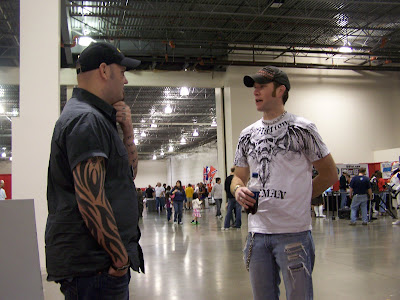 Matt Busch and Tracy Surgener scaring off customers on an already slow Sunday. 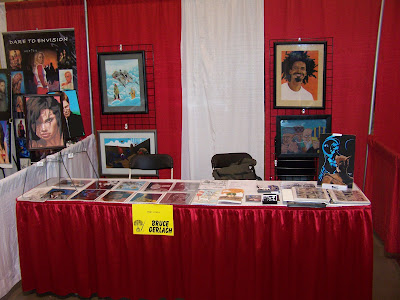 This was my set-up. I had prints, original paintings, copies of my cartoon books and sketch cards.
This was a really good weekend and I had a lot of fun doing it. I was lucky to be set up right next to Matt Busch and Alex Beuchel, so there at least was someone to talk to. The traffic flow right in front of us wasn't all that great (we were in a big area), but we were in the celebrity area, which was kind of cool. Just three booths over was Gil "Buck Rogers" Gerard and we were right across from the playmates (sweet) and some scary wrestlers.
Many thanks to the people and friends who stopped by to make a purchase or to just chat about art and comics and stuff.
Posted by Bruce at 10:48 PM 2 comments: 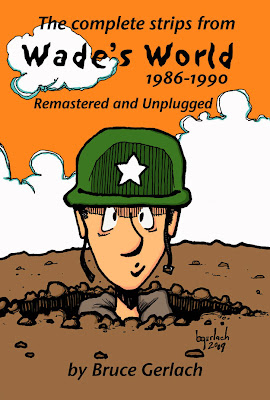 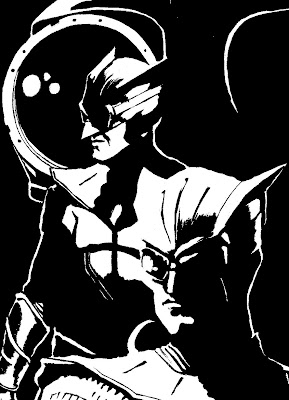 Yes, it's true. I will be a guest at this year's Motor City Comic Con for the first time evah. My buddy and I have been talking about doing this for years, even way back in the early 90's when they used to have it in Dearborn and when it was much smaller. So, now that I'm a middle-aged geek, I finally have taken the plunge and will embrace the insanity for the weekend.
This afternoon I fought the endless miles of construction and headed out there to set up my small corner in hopes that someone might purchase some goodies from me. I will have official sketch cards, prints. original artwork and a couple of self-published books of my cartoons, the latest being a collection of my late 80's cartoon strip Wade's World.
Above, is the cover to the cartoon book and a black and white scan of a painting (I'll post the finished version next week) of Night Owl from the movie Watchmen. So, if you're going, make sure you stop on by my booth and say hello.
Posted by Bruce at 12:10 AM 2 comments:

This last Saturday, the wife and I went down to the Belle Isle Aquarium for some more volunteer work with the good peeps of FOBIA. This event was the koi transfer from the basement pools to the outside pond, which was cleaned from most traces of fish poop two weeks ago. I was appointed the guy to be in the water to help the little (and in some cases, not so little) fishies to their summer playground. So, with waders on, young Cameron and myself made a pretty good team (see pic below) in the festive fish launch. No fish sticks were served at this outing.
And of course, more cartoons. This first one is another one from the pond clean-up. 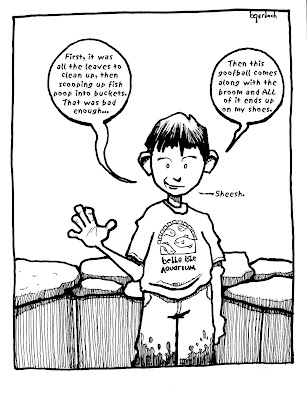 The goofball in question was me, in case you were wondering. And here is one inspired by the fish transfer. 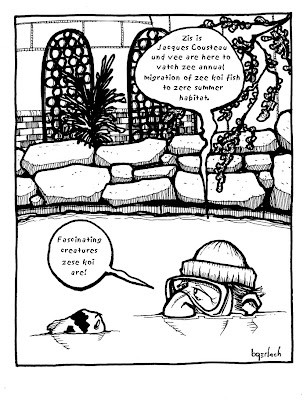 A rare sighting of the arteest with helper Cameron. 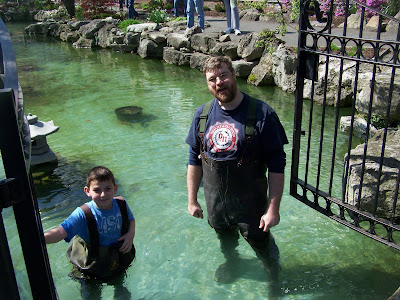 There are many more pictures on the Friends Of Belle Isle Aquarium website, so you can check them out here. I can't express enough how good it feels to help out with this kind of thing and am very glad to be a part of it all. I can see the day now when the doors will re-open.
Posted by Bruce at 4:59 PM 11 comments: